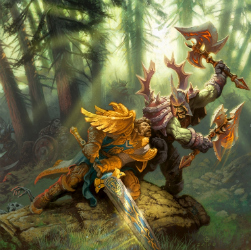 Online games are, or at the very least have been in the past, thick with spies, the latest disclosure from whistleblower Edward Snowden shows.

The US and British spying agencies – the National Security Agency (NSA) and GCHQ – have deployed undercover agents working behind avatars in online games such as those on Xbox Live, World of Warcraft, and Second Life, according to the newly released files.

In fact, there have been so many FBI, CIA, and Pentagon spooks kicking around as elves, Orcs and supermodels, a “deconfliction” group is needed to avoid them all colliding into each other, according to the newly released, top-secret documents.

The Guardian obtained the latest files to come out in NSA-gate. Written in 2008, they’re titled “Exploiting Terrorist Use of Games & Virtual Environments.”

The Guardian published the documents on Monday in partnership with the New York Times and ProPublica.

In the files, the NSA said that terrorists were already operating with the help of internet-enabled communications such as email, Voice over IP (VoIP), chat, proxies, and web forums, so it was “highly likely” they’d use the same type of communication channels in games and virtual environments (GVEs).

The NSA analyst or analysts who authored the files noted that GVEs at the time were offering private chat, group chat, chat to an alias, and broadcast chat, via both text and voice.

Xbox Live also allowed a bunch of those technologies to converge, allowing gaming over the Xbox 360 console and/or messaging over a PC with normal MSN chat.

Second Life, meanwhile, offered anonymous SMS texting and anonymous phone calling, the NSA noted, while some games allowed third-party interfaces that permitted limited functions within a browser – a good way to get by without high bandwidth, as is the case in internet cafés, for example.

All those places to connect, interact or share would be prime operating ground for terrorist web forums, the NSA pointed out.

What’s more, the games offer realistic training in weapon use, military operations and tactics, photorealistic land navigation and terrain familiarization, and leadership skills: a perfect place to learn how to carry out terrorist violence without risking any operatives.

Some of the 9-11 pilots had never flown a real plane, they had only trained using Microsoft's Flight Simulator. When the mission is expensive, risky, or dangerous, it is often a wiser idea to exercise virtually, rather than really blow an operative up assembling a bomb or exposing a sleeper agent to law enforcement scrutiny.

The intelligence agencies have prepared to track targets training in these online gaming forums for terrorist actions by building mass-collection capabilities against the Xbox Live console network, which has more than 48 million players.

The spying organizations have also deployed agents in the virtual realms, whether they be hidden amongst hordes of Orcs in World of Warcraft or posing as human avatars in Second Life.

According to the New York Times, by the end of 2008 GCHQ had set up its “first operational deployment into Second Life” and had helped the police in London to crack down on a crime ring that had moved into virtual worlds to sell stolen credit card information.

The operation, code-named Operation Galician, was aided by an informer using a digital avatar “who helpfully volunteered information on the target group’s latest activities”, the newspaper quoted the files as saying.

Online gaming was so thick with spies at the time of the files’ release, agents were all “very interested in forming a deconfliction and tipping group” to avoid bumping into each other, the documents say.

GVEs are, in fact, “an opportunity!” the NSA enthused, presenting the capability of computer network exploitation, social network analysis, tracking of identity via photos and other IDs, geo-location of targets, and sweeping up communications.

It has been well documented that terrorist [sic] are OPSEC and tech saavy [sic] and are only getting more so over time. These applications and their servers however, are trusted by their users and makes an [sic] connection to another computer on the Internet, which can then be exploited. Through target buddylists and interaction found in the gaming and on gaming web sites, social networks can be diagramed [sic] and previously unknown SIGINT leads and connections and terrorists cells discovered.

But while online gaming sounds perfect for use by terrorist networks, and while it might very well present a ripe opportunity for intelligence agents to track them or trip them up, actually finding terrorists is, apparently, another matter entirely.

At any rate, beyond the London crime ring, if the NSA or GCHQ have ever stopped a terrorist attack or found terrorists operating in online gaming, the documents don’t describe it.

The New York Times reports that according to one document, while GCHQ was testing its ability to spy on Second Life in real time, its officers collected three days’ worth of Second Life chat, instant message and financial transaction data, totaling 176,677 lines of data, including the content of the communications.

The documents don’t describe, however, the broader scope of communications collected. Neither did the NSA bring up issues about gamers’ privacy in the documents, describe how the agencies access the data, nor make clear how it was avoiding the illegal monitoring of innocent US persons whose identity and nationality may have been hidden behind an avatar.

A spokesman for Blizzard Entertainment, the company behind World of Warcraft, told then Guardian that whatever surveillance that might have taken place would have happened behind the company’s back:

We are unaware of any surveillance taking place. If it was, it would have been done without our knowledge or permission.

Microsoft declined to comment, as did Philip Rosedale, the founder of Second Life and former CEO of Linden Lab, the game’s operator, while company executives didn’t respond to the news outlets’ requests for comment.

As far as whether gaming surveillance is ongoing, the US government, at least, isn’t saying.

There have been discussion threads in gaming forums that show that since the Snowden revelations began, gamers have worried whether they were being monitored.

Image from World of Warcraft wallpaper courtesy of http://dark.pozadia.org/.