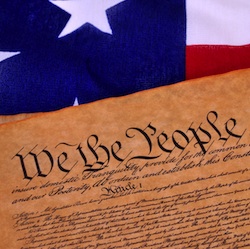 In a 68-page ruling, Judge Richard J. Leon of the District of Columbia said that the NSA’s collection technology is “almost Orwellian”, would likely horrify James Madison (author of the US Constitution), and is likely unconstitutional in its encroachments on US persons’ liberty.

According to Politico, Judge Leon found that the program appears to violate the Fourth Amendment ban on unreasonable searches and seizures.

From the ruling, as quoted by the New York Times:*

I cannot imagine a more ‘indiscriminate’ and ‘arbitrary’ invasion than this systematic and high-tech collection and retention of personal data on virtually every single citizen for purposes of querying and analyzing it without prior judicial approval. Surely, such a program infringes on ‘that degree of privacy’ that the founders enshrined in the Fourth Amendment.

The judge also said the the Justice Department had failed to demonstrate that collecting the mobile phone records had helped to head off terrorist attacks.

This ruling is the first successful legal challenge to be brought against the NSA’s phone metadata collection program – known as “PRISM” when it originally came to light – since whistleblower Edward Snowden in June released the first of a still-flowing stream of top-secret documents concerning surveillance by the NSA and other countries’ intelligence agenies.

The case was brought by several plaintiffs led by Larry Klayman, a conservative legal activist and lawyer.

The American Civil Liberties Union (ACLU) has filed a similar lawsuit in the Southern District of New York.

(Please note also that the ACLU has released a spoof Christmas video [YouTube video] poking fun at the NSA, titled “The NSA is Coming to Town.” You’re welcome.)

Judge Leon is well aware that the government won’t, and probably shouldn’t, stop its intelligence operations overnight, and hence has stayed his injunction “in light of the significant national security interests at stake in this case and the novelty of the constitutional issues.”

He’s given the government time to appeal the ruling and said that this could take  six months.

The New York Times passed on a statement from Edward Snowden, distributed by leaked-document recipient Glenn Greenwald, lauding the decision:

I acted on my belief that the N.S.A.'s mass surveillance programs would not withstand a constitutional challenge, and that the American public deserved a chance to see these issues determined by open courts. ... Today, a secret program authorized by a secret court was, when exposed to the light of day, found to violate Americans’ rights. It is the first of many.

It’s worth noting that, as Politico’s Josh Gerstein points out, Judge Leon wasn’t required to make a definitive ruling on the case’s constitutional questions but does take account of which side he believes is more likely to prevail.

Thus, Monday’s ruling does not mean that the NSA’s collection program has been definitively deemed unconstitutional.

Not yet, at any rate.

*The site for the US District Court for the District of Columbia wouldn’t load as of Monday afternoon, likely due to being utterly slammed with high traffic volume. The URL is courtesy of Politico.

Image of constitution courtesy of Shutterstock.