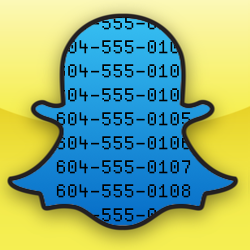 Snapchat implemented a search service so that you could put in a friend’s name and phone number, and find out their Snapchat handle.

With hindsight, we now know that it was not at all prudent to entrust phone numbers to Snapchat, because the company did two things that were contradictory from a security point of view:

But with several open source projects available that showed how to use the Snapchat web programming interface, it was really only a matter of time before someone decided to risk being kicked off Snapchat by going after those badly-shielded phone numbers.

Matters weren’t helped when a self-appointed security collective calling itself Gibson Security published details on Christmas Eve of the web requests you’d need to send in order to extract phone numbers in bulk from Snapchat’s servers.

Rather than simply fixing the problem quietly and quickly in the background – as one imagines a company like Google or Facebook would have done – and then apologising, Snapchat took the curious approach of officially declaring this process of mining phone numbers to be “theoretical.”

As The Register’s John Leyden wryly remarked, throwing terms and conditions at a technical problem, and the word “theoretical” at a vulnerability announcement, is the proverbial red rag to a bull.

And so it was that on New Year’s Day we found ourselves announcing that someone had “theoretically” recovered 4,600,000 usernames and phone numbers from Snapchat and published the whole lot online. (The last two digits of each phone number were removed in a sop to decency.)

With the ball back in Snapchat’s court, we honestly expected that Snapchat would:

After all, part of the reason Snapchat wanted us to treat the risk as merely “theoretical” was that the company claimed to have fixed the problem already, saying over the holiday break that:

Over the past year we've implemented various safeguards to make [bulk phone number recovery] more difficult to do. We recently added additional counter-measures and continue to make improvements to combat spam and abuse.

Well, Snapchat has now officially responded to the breach, and this time it has:

Indeed, it seems that on the issues of privacy and trust, things could scarely be better, with the company stating that:

The Snapchat community is a place where friends feel comfortable expressing themselves and we’re dedicated to preventing abuse.

We’re also improving rate limiting and other restrictions to address future attempts to abuse our service.

6 comments on “Snapchat praises itself over giant phone number carelessness”