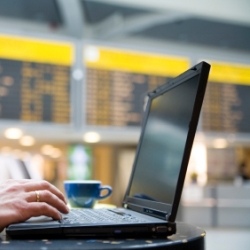 A US federal court in New York closed out the year by saying that it’s OK for the government to search travelers’ electronic devices at border checkpoints without reasonable suspicion that people have done anything wrong, given that “reasonable” takes on a whole new dimension when you’re talking about the crucial zone of border crossings.

On Tuesday, the court dismissed a lawsuit against such searches that was filed against the Department of Homeland Security (DHS) in September 2010 by the American Civil Liberties Union (ACLU), the New York Civil Liberties Union, and the National Association of Criminal Defense Lawyers (NACDL).

They don’t need reasonable suspicion or probable cause, and they can take what they like, be it laptops or smart phones – a status quo that was upheld in the New Year’s Eve decision.

DHS has the right to look though travelers’ electronic device contents and to keep the devices or to copy the contents in order to continue searching them once the traveler has been allowed to enter the US.

From that earlier case:

The permissibility of a particular law enforcement practice is judged by balancing its intrusion on the individual’s Fourth Amendment interests against its promotion of legitimate governmental interests.... The Government’s interest in preventing the entry of unwanted persons and effects is at its zenith at the international border.

The lawsuit dismissed on Tuesday was pinned on the case of Pascal Abidor, a dual French-American citizen who had his laptop searched and confiscated at the Canadian border; the National Press Photographers Association, whose members include television and still photographers, editors, students and representatives of the photojournalism industry; and the NACDL, which has attorney members in 25 countries.

In May 2010, Abidor, a 26-year-old graduate student at the Institute of Islamic Studies at McGill University in Montreal, was riding a train from Montreal to New York City when a US Customs and Border Patrol (CBP) officer checked out his customs declaration.

Abidor told the officer that he had briefly lived in Jordan and had visited Lebanon the year before. The travel showed up on his French passport.

The officer wanted to check out Abidor’s laptop, so Abidor willingly typed in his password.

On the laptop, the officer found images of rallies held by Hamas and Hezbollah – both designated as terrorist organisations by the US State Department.

Abidor told the agent that the images were there because his PhD focus is the modern history of Shiites in Lebanon.

But that doesn’t explain why Abidor would save images of Hamas, “a terrorist organization not composed of Shiites and not based in Lebanon,” Senior US District Judge Edward R. Korman wrote in his decision.

According to the ACLU, Abidor was questioned, taken off the train in handcuffs, and held in a cell for several hours before being released without charge.

When he got his laptop back in the mail 11 days later, it showed that many of his personal files had been searched, the ACLU said, including photos and chats with his girlfriend.

This case was one of two the ACLU has brought in the past few years against the government’s broad powers to conduct searches at border checkpoints.

In 2012, the ACLU brought a suit over the border checkpoint seizure of a laptop belonging to David House, a human rights activist, computer security consultant and supporter of Bradley Manning.

That seizure, carried out at a Chicago airport in 2011, was likewise conducted without a search warrant or any charges of crimes.

It resulted in the US settling the case, admitting that House was on a watch list, and agreeing to turn over investigative documents and to destroy copies of House’s data.

In the case of Abidor, the ACLU said it’s considering an appeal.

Catherine Crump, the ACLU attorney who argued the case in July 2011, said that searches conducted at the border without reasonable suspicion just can’t meet the standard set by the Fourth Amendment to the US Constitution, which protects against unreasonable search.

But such searches are only part of a much bigger picture, she said:

Unfortunately, these searches are part of a broader pattern of aggressive government surveillance that collects information on too many innocent people, under lax standards, and without adequate oversight.

In fact, the ACLU points out that “thousands of innocent American citizens are searched when they return from trips abroad.”

Justice Korman dismissed the idea that such searches are rife, pointing to statistics from the CBP that claim that only a tiny fraction of devices get searched at checkpoints.

There is less than a one in a million chance that a computer carried by an inbound international traveler will be detained. Even in the case of a quick look and search of a computer, in which CBP officers simply have a traveler boot the laptop up, and look at what is inside … as opposed to a more comprehensive forensic search that would presumably occur if a computer were detained, the number of U.S. citizens subject to such a search comes to approximately 4.9 per day, or less than a five in a million chance that their computer will be subject to any kind of search. Even if both U.S. citizens and aliens are counted, there is about a 10 in a million chance that such a search will take place.

The judge pointed to an earlier court finding that called it a “far-fetched” notion to suppose that anybody might be subject to such search – mostly due to the fact that the US simply can’t get around to searching everybody’s devices:

Customs agents have neither the time nor the resources to search the contents of every computer.

Darn, what a shame. Don’t forget to append the word “yet” to the end of that, though, as occurs elsewhere in the court papers.

Beyond simply not having the wherewithal to rummage through every single traveler’s electronic devices, Justice Korman maintains that search at border checkpoints simply wasn’t all that big a deal before computers.

That’s in spite of plenty of lawyers, photographers and scholars having traveled with sensitive documents and photographs and having conducted potentially sensitive scholarly research – all without anybody suggesting that First Amendment protection of free speech was in danger, he said.

At any rate, the plaintiffs in this case “must be drinking the Kool-Aid” if they think that journalists or others with sensitive information can guarantee confidentiality to their sources or that they can protect privileged information, Korman wrote, saying that Abidor “cannot be so naïve” as to expect that crossing the Syrian or Lebanese border won’t also potentially result in search and seizure.

Finally, Justice Korman took Abidor to task for storing sensitive data on his device, pointing to a Ponemon Institute study (sponsored by Dell) that claims that business travelers in the US, Europe and the United Arab Emirates lose or misplace more than 16,000 laptops per week.

Korman proposes that given all the risk, why risk really important data at all?

... it would be foolish, if not irresponsible, for plaintiffs to store truly private or confidential information on electronic devices that are carried and used overseas. … One of the many suggestions that the Dell study makes to travelers is to '[t]hink twice about the information you carry on your laptop.' … And it concludes with the commonsense query: 'Is it really necessary to have so much information accessible to you on your computer?'

Is it necessary? Well, most people I know find it rather convenient to store data on data-storage devices.

Sheesh, given this ruling, that’s another question entirely.

What do you think? Please share your take in the comments section below.