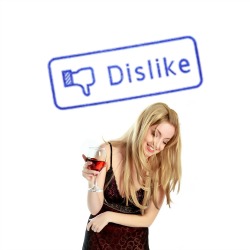 Potential employers Google us. They pore over our tweets. They scan our Facebook postings.

They want to see our truly embarrassing internet gaffes before they let us step through the door for an interview.

In a 2010 survey of 825 staffing professionals, 73% of respondents said they use social media platforms such as Facebook to recruit applicants.

What should be more worrisome to those of us with a certain joie de vivre style – call it joie de postings – is the number of managers who choose not to hire applicants based on what they discover in their social media research.

In a 2012 CareerBuilder survey of more than 2,000 hiring managers and human resources professionals, 34% reported that they had decided against hiring applicants based on what they uncovered in social media.

To be precise, this is what those employers found in the postings made by people they didn’t hire:

Those posting sins sound bad, don’t they? They sound like a pretty good indication that an employee will not work out well. Those postings would likely convince many of us not to hire the sinner in question.

But a new study published by Florida State University’s Journal of Management suggests that we might be making mistakes when we pass people over for Facebook postings or the like, given the lack of correlation between a) social media profiles that look pretty bad and b) the subject’s actual work performance and whether their managers keep them in the job long-term.

For the study, “Social Media for Selection? Validity and Adverse Impact Potential of a Facebook-Based Assessment,” researchers asked recruiters to evaluate the Facebook profiles of college students who were applying for full-time jobs.

They then followed up with supervisors to find out how the new hires fared, tracking supervisors’ ratings of their employees’ job performance, supervisors’ intentions with regards to retaining or letting those employees go, and actual employee turnover.

What they found was that recruiters’ evaluations of these people, based on their Facebook profiles, was no prediction of their performance or whether they’d keep their jobs – at least, the Facebook profiles were no better at prognostication than more traditional predictors, including the employees’ cognitive ability, self-efficacy and personality.

(In psychologists’ terms, self-efficacy is the extent or strength of a person’s belief in his or her own ability to complete tasks and reach goals.)

Furthermore, the researchers actually discovered a pernicious streak of bias, evidenced in Facebook ratings that tended to favor female and white job applicants.

The takeaway, from the research report:

The overall results suggest that organizations should be very cautious about using social media information such as Facebook to assess job applicants.

Researchers Chad H. Van Iddekinge, Stephen E. Lanivich, Philip L. Roth and Elliott Junco write that human resource professionals’ reliance on social media is easy to understand: it’s out there, free for the picking, unlike interviews and work sample tests, which are costly and time-consuming to set up and administer.

And Other recent research has pointed to social media content as providing a quick, easy peek at job applicants’ real selves.

But checking out job applicants’ intimate postings can potentially put employers into a questionable position when it comes to defending the legality of their selection processes, given that employers may discover, and find impossible to ignore, information about ethnicity, age, physical disabilities, religious beliefs, marital status, or sexual orientation, while blog or Twitter postings or other written material can reveal indications of mental health issues, substance abuse, arrests, or other “life challenges,” the researchers note.

Other problems with vetting job applicants based on social media content is that applicants have limited control over what others post to their profiles.

As far as gender bias goes, the researchers note that females have less tendency to post material about sexual exploits or substance abuse; tend to have higher verbal and writing ability that comes across in audio, video or written social media material; and tend to post more photos of themselves smiling and with others – signs pointing to what psychologists call “agreeableness.”

They found that Hispanic and Black subgroups, meanwhile, have a greater tendency to participate in social and political causes and to have that reflected in social media – something that may well set them apart as “other” in hiring managers’ minds and may influence recruiters to give their Facebook profiles lower ratings than profiles of those who are more like the recruiters themselves.

In other words, people often hire people who are like them – a recipe for disaster with regards to diversity in the workplace.

Given these and other limitations of basing hiring decisions on Facebook profiles and other social media content, the researchers are strongly recommending against the practice – at least until reliable, valid methods for collecting and evaluating the content get ironed out.

What do you think? Do you, or others you know of, suspect that you’ve been unfairly looked over for a job based on your social media selves?

It’s hard to imagine that employers will ever stop basing hiring decisions on information that we ourselves willingly post, that’s free and easy for them to access, and that seems, at least on the face of it, to provide a good look at our “real” selves.

But given this thoughtful study, there certainly seem to be compelling reasons to take a cold, hard look at what we really can learn about people on Facebook, Twitter and other online venues, as opposed to what we think we can learn.

Please share your views in the comments section below.

17 comments on “Facebook is a bad way to rate potential employees, study finds”