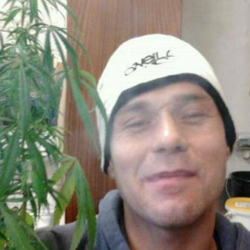 A Polish prisoner has taken one of the most head-desk-bang-bang selfies ever: a picture of himself, taken on a contraband mobile phone smuggled into the prison, showing a lush, equally contraband and definitely illegal cannabis plant he grew from seed in his cell. According to Metro, Marcin Zendarski used the illegal smartphone to keep in touch with friends, watch TV shows and browse the web from an Austrian jail.

He also smuggled in cannabis seeds and secretly grew a plant in his cell, in Garsten jail, Upper Austria.

According to the Polish newspaper Fakt, Zendarski began to distribute marijuana to his fellow inmates.

The horticulturist was understandably proud.

One look at the selfie he posted onto Facebook of himself with the plant shows why: it’s a darn healthy looking specimen.

But as these things tend to happen, the photo began to get popular online.

Thus – you saw this coming, of course – the guards got wind of his growing operation.

A search of the entire prison ensued, and guards found plenty of illegal items and substances.

Zendarski has received additional time for drugs and a fine for having a smartphone.

He’s also apparently been receiving death threats from other prisoners who lost out when they were found to have illegal items. He’s on round-the-clock surveillance as a result.

I don’t want to poke fun at a man who could lose his life over the sometimes illegal substances of pot and smartphones.

But this is yet another, extremely extreme case of being careful about what you post online.

Whether you’re talking about a burglar jumping on Facebook to dare police to catch him if they can (they did, in 5 minutes) or people posting about clueless bosses (and thereby potentially getting fired or not hired) we’ve all got to get it through our heads that bosses, potential employers, police and yes, prison guards all – duh! – use Facebook.

Prisoner’s selfie  courtesy of himself, via Facebook, via Metro.