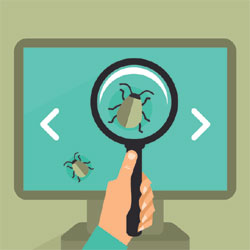 Several US judicial system websites were offline for a spell on Friday, prompting immediate worries of some kind of organised cyber assault aimed at bringing the nation’s legal system to its knees.

It was pretty quickly revealed to be just a technical glitch, rather than the DDoS attack described to the press by a court spokesman and promptly reported by several news sources.

Gmail and some other Google services were also taken out for a brief period on Friday, with the cause again a technical error rather than malicious intent.

The court service outage affected central federal court hub uscourts.gov and many other court-related sites as well as the PACER document-handling system, preventing perusal or filing of court papers.

Fears seemed to run high within the judicial system, with one leaked comment apparently describing a “new national cyberattack on the judiciary”

By the end of the day the FBI had calmed these fears, telling press that the outage was down to a technical problem.

Over at Google, services including Gmail, Google+ and Google Calendar were offline or slow to respond for at least some users on Friday, starting at around 7pm GMT (11am PST).

According to Google’s subsequent blog post, a bug in a system responsible for configuring other systems led to the problem, and apparently sorted itself out while engineers were trying to figure out the issue.

Things started improving after 25 minutes and were fully restored within an hour.

Google’s to-do list for the next few days includes working out why things went wrong, and seeing if it can find ways of preventing similar problems in future.

There seems to have been much less fretting over possible cyber attacks in this case, although some reports claim the brief outage “hit millions” around the world, keeping the hysteria levels well up.

With the apparently ever-growing prominence of cyber woes in the world of late, it’s hard to criticize people for assuming an outage is down to an attack, but press spokespeople really should be sure what’s happened before assigning blame.

Much as we like to see people being open and transparent – providing as much information as possible as soon as possible to enable people to respond appropriately – sometimes it’s best to wait until you’ve got your facts straight to avoid unnecessary panic.