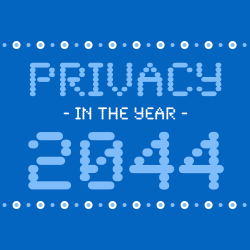 So we asked Naked Security’s Virtual Futurist, Frank di Scorse, to do the following:

Ask yourself, “Is this where we want to go?”

This is an important day in computer security: it’s the Thirtieth Anniversary of the famous Data Privacy Day Protests, back in 2014.

A US soldier named Chelsea Manning was sentenced to 35 years imprisonment for revealing decades of US State Department communications.

A US spy called Edward Snowden went into exile to reveal the extent of his employer’s interest in internet information.

And a digital payment system called Bitcoin caused controversy, primarily, it seems, because it made people anonymously rich in return for playing an elaborate cryptographic computer game with specialised graphics chips.

It seems hard to believe today, but these were hot topics back then – hot enough that on 28 January 2014, Data Privacy Day protestors took to the streets in dozens of cities and towns across Europe and North America.

The watchword amongst activists in those days was OPT-IN, meaning that organisations – governments, employers and especially commercial companies – who wanted to collect data about other people should be required to ask for permission first.

The main argument for approaching privacy this way followed what you might call the lines of consensual capitalism.

If the feature that tracked you and collated lots of data about you really was as good as the vendor claimed, everyone would opt-in anyway, which would be a winning outcome for everybody.

In the protestors’ words, “Why should a second-rate service be allowed a first-rate crack at collecting our data without so much as a ‘do you mind’?”

Ironically, it was this obsession with asking for permission before publication that was to be the activists’ downfall.

In 2014, as today, protests – especially crowded ones inside public buildings – enjoyed wide coverage on social networks.

Back then, photos were grainy, and videos (quaintly called “high definition” simply because they were higher than the previous ultra-low-resolution standard) were pixellated and jumpy.

Audio was often recorded with just two channels (quaintly called “stereo” and divided into “left” and “right”, after the position of the ears on the human head).

Nevertheless, the quality of social media postings was often good enough to identify individual faces, even in group shots. And some activists couldn’t help noticing, and commenting publicly, that others who called themselves activists hadn’t had the guts to turn out in person.

Indeed, some of those activists had chickened out and stayed away on the day, preferring to read the details from a distance in news reports.

But other activists, who had been out there on the front lines with their aggrieved brothers and sisters, simply never showed up in social media in a way that let the world know.

This was to be the turning point in the privacy debate that brought us to where we are today, nearly half way through the first century of the third millennium.

It seems obvious now that privacy isn’t a luxury anyone should aspire to, let alone a right or an expectation, and that (paradoxically, perhaps, to the protesters of 2014) that the less privacy you maintain, the higher your quality of life.

Two examples from the lawcourts in 2043 suffice to make this point clearly:

• Maria Santobal, who successfully sued the Global Retail Marketing Association for its failure to make her aware of discounts and offers via email, as required by the combined Northern American/Greater European Union Financial and Retail Industry Notification regulations of 2039.

Santobal’s argument was not only that she lost out financially by paying full price for items she ought to have been able to buy at a discount, but also that the organisation’s failure to use her personal information as required by law raised the worrying question, “How could this have happened?”

• Raymond Phangiso, who lost a tribunal case in the International Employment Court, following his dismissal for having unexplained gaps in his social media profile.

Ironically, in 2014, Phangiso would probably have been taking action against his former employer for using personal photos he’d posted online as evidence that he was unfit for his job.

In 2044, it’s no longer what you do that makes you stand out as an exception – it’s the things that you did anyway, but chose to suppress.

You can’t help thinking that the activists who took part in the DPD Protests of 2014 would be pleased with how things have turned out, because censorship is now all but impossible.

In the mid-21st century, online privacy is inextricably connected with safety, so that other people can almost always find out enough about you to make an informed judgement about how safe it would be to do business with you.

Gone for good is the quaint concept that privacy should overlap with security, making it all-to-easy for you to hide malfeasance from your fellow netizens.

After all, if you have nothing to hide, why do you need to hide it?

NOTE TO READERS. This article has been seeded with all major search engines and social networking sites in compliance with the Prevention of Data Concealment Act (2041) of the Federated Multinational States of Northern America. Any comments you post here will be automatically uploaded to the CanMexUS Keyscore servers, thereby fulfilling your personal obligations under the Disclosure of Public and Private Opinion Act (2039, amended 2043).

Of course, our future doesn’t have to look like this.

In support of Data Privacy Day 2014, we’ve come up with two thought-provoking articles to get you thinking about privacy.

With a few small changes in the way you deal with your personal information – how willingly you part with data such as where you are, where you live and what you’re doing – you can help to rewrite Frank’s virtual future in a more palatable form.

• PRIVACY IS NOT DEAD – YOU’RE JUST DOING IT WRONG

4 comments on “Report from the future: Data Privacy in the year 2044”