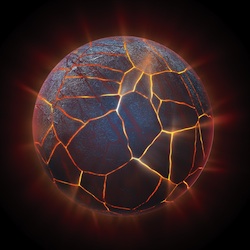 On the TV show Mission: Impossible, the tape with mission instructions always self-destructed, sometimes crumbling and sometimes going up in smoke.

The US military now wants that to happen in real life with electronics that shatter and turn to dust on command.

It’s got obvious appeal for keeping sensitive technology out of the hands of enemies, but DARPA also sees it as having potential applications for use within the human body.

In medical applications, such transient electronics might work as sensors. As they break down into material that could be absorbed by the body, they could also be used in treatment and continuous monitoring.

By the way, just because we don’t often have an excuse to talk about cuttlefish on Naked Security, it should be pointed out that VAPR isn’t the first program to look at electronics that could be absorbed by the human body.

But back to fine piles of dust on the battlefield: in order to achieve dust that would be useless to the enemy, given that it couldn’t be re-engineered, IBM plans to use strained glass substrates that will shatter and thereby reduce attached chips into silicon powder.

The trigger for the shattering might be a fuse or a reactive metal layer that’s activated by a radio signal.

PARC will be working with stress-engineered materials, silicon processing, and microchip handling and deposition to create a transience technology it’s calling Disintegration Upon Stress-release Trigger, or DUST.

PARC says the end result will be small, sand-like particles that would be too fine to see with the naked eye and should thereby blend into the surrounding environment.

Without the ability to make their gadgets vanish, DARPA officials say it’s close to impossible to track and recover every electronic device on the battlefield.

Alicia Jackson, the VAPR program manager at DARPA, said that these types of transient electronics should help.

DARPA is looking for a way to make electronics that last precisely as long as they are needed. The breakdown of such devices could be triggered by a signal sent from command or any number of possible environmental conditions, such as temperature.

Devices going “poof!” on command is a great idea. It would be nice if data itself had a self-destruct sequence.

Ideally, it would be like SnapChat, purveyor of the supposedly vanishing photos service, but different in that it would actually make things disappear.

If you have proposals for incorporating cuttlefish ink as a medium for storage of personally identifiable information or for the posting of Facebook messages or sexting, please let us know about it in the comments section below.