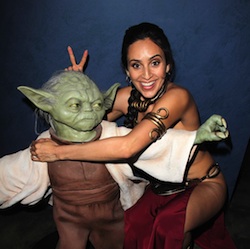 The Jedi Church recognises that, as its site says,

There is one all powerful force that binds all things in the universe together, and accepts all races and species from all over the universe as potential members of the religion.

Indeed, the Force may not be with you if you’re a Jedi and you want to marry another Jedi.

That is why, Facebook data crunchers have told us in the first installment of a week’s worth of Valentine’s Day relationship analysis, Jedis are the most likely of all faiths to marry people outside of their religion.

Mike Develin of Facebook Data Science writes that the Jedi numbers are not all that glum, however:

It is hard to find someone with compatible midi-chlorians*. Although considering that Jedi comprise only 0.15% of the population, it is still a rather impressive use of the Force that 13.2% of Jedi manage to find another Jedi to marry.

(*Midi-chlorians are intelligent, microscopic, symbiotic life forms living inside the cells of all living things, Wookeepedia explains, and in sufficient numbers allow a host to detect the pervasive energy field known as the Force.)

Facebook has squeezed its enormous cornucopia of personal user information to come up with analysis of anonymised, aggregated data for similar insights into other faiths’ reported romantic habits and nuptial tendencies.

Bear in mind that, again, beyond being anonymised and aggregated, the data crunching was also done on publicly reported religious affiliation. So for anyone that hasn’t disclosed their religion on Facebook, they obviously won’t be counted. Does it disturb you that Facebook knows whom you’re statistically likely to spend Valentine’s Day with? And, depending on your propensity to post embarrassing updates, to know how?

Happy Valentine’s Day anyway, and if you don’t think your religious affiliation or romantic inclinations are any of our business, make sure you don’t report it on Facebook!