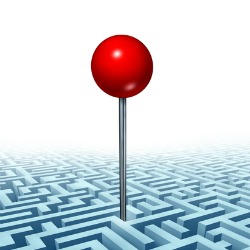 Every day, GPS navigation systems are at work around the globe, guiding and tracking lorries, trucks, mobile phones, passenger vehicles, aerospace vessels and more, in spite of whatever the weather throws at them, as long as they’re in line of sight with at least four satellites.

But while they’re ubiquitous, GPS devices are also fragile.

That’s because they run on feeble signals that can be spoofed and thrown off course by stronger signals (it’s been demonstrated with an $80 million yacht and a drone).

Beyond spoofing, GPS can be swamped entirely by stronger signals coming from GPS jammers – low-power, pocket-sized devices that drown out signals going to GPS receivers.

You can pick up such jammers cheap on the internet, where they’re sold under premises such as helping to silence the clamor that plagues noisy classrooms, theaters, restaurants, or business meetings.

They’re also used by commercial drivers who don’t want their employers tracking their every move, domestic violence victims who don’t want to be found, and criminals who use jammers to intercept valuable cargo loads or commit other crimes.

A recent example: last month, US authorities arrested what they said was a gang of high-tech burglars who allegedly cut telephone lines to disable alarms and used cellular telephone signal jamming devices to stop the back-up alarms from notifying the alarm companies’ central stations.

Beyond enabling crooks, jamming can have dangerous consequences.

In August 2013, the US Federal Communications Commission (FCC) proposed a $32K penalty for using a GPS jamming device.

Michele Ellison, Chief of the FCC’s Enforcement Bureau, cites the potential consequences of GPS jamming and the FCC’s motives behind jacking up punishment for using jammers:

While people who use jammers may think they are only silencing disruptive conversations or disabling unwanted GPS capabilities, they could also be preventing a scared teenager from calling 9-1-1, an elderly person from placing an urgent call to a doctor, or a rescue team from homing in on the location of a severely injured person. The price for one person's moment of peace or privacy could be the safety and well-being of others.

Beyond fines and warnings, communications experts have been seeking technological improvements in GPS that could overcome jammers.

Within the past year, the UK has been ramping up one such technology.

LORAN has been around for a while, having first been used in military operations in World War II, but the growing popularity of GPS pushed LORAN out in the 1990s.

The “enhanced” part of eLORAN comes from more recent improvements in the technology, including increased accuracy of traditional LORAN, achieved via advances in receiver design and transmission characteristics.

One such improvement is the ability of eLORAN receivers to now use signals from all stations in range, up to 40 stations.

Dana Goward, president and executive director of the Resilient Navigation and Timing Foundation (RNT) Foundation, which supports adoption of eLoran, told InsideGNSS that the eLORAN signal is about 1.3 million times more powerful than the GPS signal – far too brawny a signal to be tripped up by GPS jammers.

On top of that, the signals can, unlike GPS, reach underground, under water, and into buildings, InsideGNSS reports.

Here’s how it’s described by David Last, a British expert on positioning, navigation and timing systems (PNT), as quoted by InsideGNSS:

I draw the analogy by saying that Loran in its original form, which a lot of people remember, came from the days of black and white television. What we’ve got here [with eLoran] is still television, it’s still Loran — but it’s digital. It’s high-definition. It’s color. It’s big screen. It’s all of those things.

On top of that, eLORAN signals are seen as an excellent backup to GPS signals, being impervious not only to whatever a jammer throws at them but also to asteroids.

The Telegraph reports that the UK is pioneering the use of eLORAN for navigation.

The UK has, actually, been building eLORAN infrastructure since at least 2007, when the UK Department for Transport, via the General Lighthouse Authorities, awarded a 15-year contract to provide a state-of-the-art eLORAN service to improve the safety of mariners in the UK and Western Europe.

More recently, the General Lighthouse Authorities last year became the first in the world to deploy eLORAN to help counter the threat of GPS jamming for shipping companies operating both passenger and cargo services along the south and east coasts.

The technology is expected to be up and running and foiling GPS jammers by this summer.

Meanwhile, the US is following suit.

According to GPS World, President Barack Obama last month signed the NDAA (National Defense Authorization Act) for 2014 – an act that shows “an acute awareness” of the vulnerability of space systems to navigational disruption, it reports.

It sounds like the US is gearing up to protect national security, space systems and more with the unjammable technology.

Will it protect us from burglars snipping our phone lines and jamming our backup alarms?

We’ll stay tuned – no pun intended! – and let you know.

Image of maze courtesy of Shutterstock.