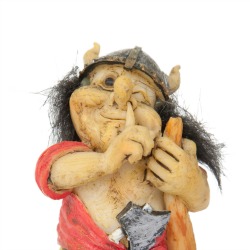 Canadian researchers have found that online trolls – those sowers of discord; those who start flame wars by arguing or upsetting people; those who post inflammatory, extraneous, or off-topic messages in communities – just want to have fun.

In fact, that’s the title of a paper published recently by three researchers from the Universities of Manitoba, Winnipeg and British Columbia.

Unsurprisingly, trolls also reek of what scientists call the Dark Tetrad of noxious personality variables: Machiavellianism (willingness to manipulate and deceive others), narcissism (egotism and self-obsession), psychopathy (the lack of remorse and empathy), and sadism (pleasure in the suffering of others).

The researchers set out to determine whether “everyday sadism” would be the most germane trait to trolling, they said. After all, it’s pretty intrinsic to troll culture:

The surveys embedded questions about trolling and other online behaviors into a larger battery of personality questionnaires.

Some of the responses to questions that participants chose, along with the tendencies they point to:

Taken together, the two studies showed that, for one thing, Dark Tetrad traits are extremely highly correlated with people who spend a lot of time commenting online.

And out of those traits – Machiavellianism, Narcissism, psychopathy, direct sadism and vicarious sadism – it was sadism that had the strongest association with trolling.

In fact, the researchers wrote, associations between sadism and respondents’ trolling scores were so strong, “it might be said that online trolls are prototypical everyday sadists.”

Other online activities, including chatting and debating, were unrelated to sadism.

In fact, the internet is like heaven for sadists. It can be anonymous, and it enables sadists to easily connect with other sadists.

Both trolls and sadists feel sadistic glee at the distress of others. Sadists just want to have fun... and the Internet is their playground!

We’re told not to feed the trolls, and that’s probably the best approach to take, although some victims have said that starvation doesn’t make them shrivel up and go away.

In fact, getting rid of sadists’ playgrounds might be a more effective way to protect people from getting tortured by trolls.

As Slate’s Chris Mooney reports, that’s exactly what Popular Science did in September 2013, choosing to do away with its comments sections entirely.

Google, for its part, tried to clean up the inflamed boil that is YouTube commentary – sweetly, a little pathetically, and ultimately futilely – by begging users to use their real names.

Twitter has also pledged to protect its beleaguered users with a Report Abuse button.

Starving the trolls isn’t the only way to make them shrivel up. Posting playground patrols or closing the playground entirely are other ways to fight back.

Which method for troll eradication do you think is the most effective?

35 comments on “Inside the minds of internet trolls”