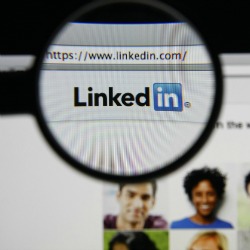 Anna R., a US woman from Columbus, Ohio, says that she was once sexually assaulted in the workplace.

She left her job, she says, hoping to leave the trauma behind.

But then, the stalking started.

It came via email, voicemail – “some threatening, some flirty, day after day”, she said.

But there was one social media site – LinkedIn – where she couldn’t block the abuse.

Every day, she was being checked out on the professional networking site. The last straw came when her abuser started researching her connections to see where they were located, as he attempted to track her down.

If [my connections] were in a different area in which I worked for him, he would e-mail me to see if I moved and what I was doing. Little things like that started getting me really scared.

According to Anna R.’s account, LinkedIn customer service said that she would only be able to block a member if that member was prohibited from having a LinkedIn account by virtue of a court order – a requirement she (rightfully) found “ludicrous and to the extreme”, given how many of LinkedIn’s social media brethren had a blocking or report abuse feature.

LinkedIn was, as she charged, an outlier. But now, 10 months after Anna R. started a petition to get LinkedIn to create a blocking feature, LinkedIn has done just that.

The new feature is both a response to users’ requests and because it’s “the right thing to do,” LinkedIn said.

So any LinkedIn user who’s being stalked – or simply harassed by a zealous recruiter, for that matter – can now block the person who’s discomforting them. This is what will happen:

As many LinkedIn users have noted, blocking a specific person doesn’t mean that he or she can’t simply browse a profile anonymously. In fact, setting a profile to view anonymously is what LinkedIn recommends users do before blocking another user.

LinkedIn Head of Trust & Safety Paul Rockwell offered a number of additional settings to tweak in order to protect a profile:

Some commenters on LinkedIn’s announcement point out that urging users to browse anonymously before blocking others seems to be aiding and abetting exactly the kind of stalker that a block feature is meant to deal with.

That bit confuses me, too. I can see how anonymous browsing shields stalking victims from their predators, but doesn’t it also shield stalkers’ actions from their victims? That side of the coin certainly doesn’t seem to present a step in the right direction.

In fact, following user outcry, Twitter itself in December had to back off of a watered-down block feature that would have allowed blocked users to continue to follow their targets, oblivious to the fact that they’d been blocked as they continued to interact with blockers’ Tweets, receive their timeline updates, and thereby, critics said, enable blocked users’ friends to continue harassment of victims.

What do you think? Is LinkedIn’s encouragement to browse anonymously a watered-down approach to blocking?

Image of LinkedIn courtesy of Shutterstock.