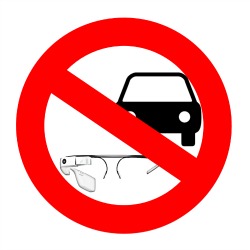 Google is clearing the road to make sure that Glass doesn’t hit any bumps – literally.

According to Reuters, the company has hired lobbyists in at least three US states to battle proposed restrictions on driving with headsets such as Google Glass.

Reuters reports that eight states are considering regulating the computerized eyeglasses, spurred on by the concerns of law enforcement and others – including people who deal with spinal cord and traumatic brain injuries – that the devices will cause wearers to pay more attention to their email than the road and thereby cause serious accidents.

According to Reuters, here are the states where legislation is being considered, along with the pushback Google’s giving:

Google has hired lobbyists to convince legislators that it’s not necessary to restrict the wearing of Glass devices behind the wheel.

Legislators said they hadn’t been contacted by Google.

Officials of these states hadn’t replied to Reuters’ inquiries as of Tuesday morning.

Without laws against wearing the devices while driving, courts don’t yet know quite how to handle Google Glass.

In one high-profile case, a woman in San Diego, California, was ticketed for wearing Glass while driving, after she was pulled over for speeding in October.

Cecilia Abadie was ticketed for using a “visual” monitor in her car while driving, but the case was thrown out because police couldn’t prove that the Glass computer was operating at the time.

According to the US’ National Highway Traffic Safety Administration, 3,328 were killed in distraction-related crashes in 2012.

A much larger number – an estimated 421,000 people – were injured in motor vehicle crashes involving a distracted driver, representing a 9% increase from the estimated 387,000 people injured in 2011.

“Distraction” is defined as being anything from talking to passengers, eating and drinking while driving, adjusting the radio, using a navigation system or, the big one, texting.

It is this type of potentially lethal action that legislators seek to curb and that Google seeks to keep them from curbing.

It might not necessarily be all black and white, however.

At least one Glass fan pointed out that the headgear can actually help make for a safer ride because it requires far less fiddling than your typical GPS, and it thereby helps drivers keep their eyes on the road, where they belong.

Here’s what Reuters commenter “robertvorthman” had to say:

Google Glass is the safest GPS I have ever used. It can be controlled completely hands-free. It can also be used eyes-free.

Saying ‘ok glass, get directions to home’ can easily be dictated without the need to look at the display. The driver can rely solely on the voice prompts like ‘take exit 55 in 1 mile’.

The display never turns on unless it is time to make a turn at which time the map only appears for a few seconds before the display turns off again.

If the driver does feel the need to view the display, it is much quicker to glance at because the display is floating above the road at a focal distance of six or seven feet, this reduces the amount of time the driver is viewing the GPS, and keeps their head up so don’t miss what’s happening on the road.

Google Glass does not block your vision and the display will never turn itself on without user interaction to show you notification, so just wearing it does not pose a distraction to driving. In fact, robertvorthman said he’s hoping that legislators try driving with Glass to see for themselves whether this technology could improve road safety and save lives.

A good suggestion, but one that could be improved by getting road safety experts’ opinions into the mix, of course.

After all, it’s a bit of a leap of faith to trust that, were Glass usage to be OKed for navigation purposes while driving, Glass users would in fact restrict their gadget interaction to solely that required by hands-off, eyes-off navigation.

Law enforcement and safety groups are concerned that drivers wearing the devices will pay more attention to their email than the road, causing serious accidents.

Good. They should be concerned.

Judging by our misuse of texting while driving, and given how many horrific accidents that leads to, the idea of giving people ever more attractive distractions while driving is a dreadful prospect.

Google recently published an etiquette guide for Glass. It’s acutely aware of the public’s pushback against the privacy implications of these devices, among other implications.

The company is obviously aware of potential nonlethal Glass side effects such as privacy invasion or simple rudeness and is willing to spend time publishing guidelines to help avoid such situations.

I would hope that Google might also put on its thinking cap to help curb the potentially far more lethal side effect of distracted driving. Google’s good at tracking things. Maybe it should, for example, encourage law enforcement to subpoena records of Glass usage.

If Glass usage is implicated in an accident, I would hope that Google would want that known.

9 comments on “Google paves the way for Glass; throws lobbyists in front of distracted-driver legislation”