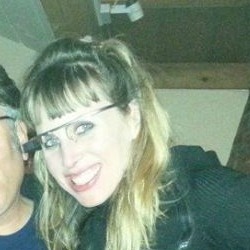 Yes, we understand how noxious it is that some glassholes’ sense of entitlement exceeds their common courtesy when it comes to stapling a computer to their head and walking around public places, ogling everyone within eyeshot and thereby trampling over their privacy.

Yes, it’s great fun to scorn Glass users – those whom Google would love for us to giddily dub “explorers”.

But the scorn has now gone too far, having evolved into what might be the first violent action taken against a Glass wearer.

Sarah Slocum, a social media consultant, on Saturday posted on her Facebook page about being attacked, in a bar called Molotov in San Francisco, over her face contraption.

(You’ll note that, lamentably, Slocum’s page is not private. Ms. Slocum, we should talk about Facebook privacy settings – please start by reading Naked Security’s tips on staying safe on Facebook.)

OMG so you'll never believe this but... I got verbally and physically asaulted [sic] and robbed last night in the city, had things thrown at me because of some [removed] Google Glass haters, then some *bleeeeeeeeeep* tore them off my face and ran out with them then and when I ran out after him his *bleeeeeeep* friends stole my purse, cellphone walet [sic] and everything.

Slocum managed to retrieve her Glass, but so far, she says, no luck in getting her other belongings back.

She shared some of her Glass footage with KRON 4 which shows numerous people shielding themselves from the video, a girl saying “you’re killing the city” and a towel being thrown in her direction, as well as a man making a grab for the device on her face.

But wait, Glass haters will say.

Was it ok for Slocum to be capturing the video footage in a public place? Did the bar she was at allow filming, via any mode, whether it be cellphone, camera or Glass?

You’ll remember the mind-numbingly rude behavior of Nick Starr, the infamous glasshole who got kicked out of a local 24-hour diner for wearing Google Glass and giving the place a dish of attitude when he was told to de-glassify himself.

Starr not only took exception to the diner’s laudable insistence that he take his Glasses off but also went on a glassholic rant on Facebook to urge that the staff member who told him where to stick his Glass should be sacked.

Starr was easy to seethe at. He was the epitome of the type of user – excuse me, “explorer” – that spurred Google to recently publish its etiquette guide for Glass.

But was Slocum as glassy as that? It doesn’t sound that way.

Right before she was attacked, she said, she was showing the gadget to someone who had what is very likely a common reaction: namely, curiosity. Slocum was letting her inquisitor try on Glass and giving him or her a demonstration.

That’s actually what Google recommends that Glass wearers do: be polite, respectful and helpful in the face of inevitable curiosity.

(I mean, duh – it’s just good marketing. Who’s going to get warm and fuzzy about Glass if all they encounter are glassholes who won’t give them the time of day [or the ingredients for their cocktail, or whatever else Glass wearers can give people, for that matter].)

Slocum’s hoping this doesn’t stop anybody from getting the pricey head gear:

I hope this doesn't deter anyone from getting Google Glass. Usually the experience is 180 degrees different, and right before this happened I was showing one of the normal, excited and curious individuals there how it works, letting them try it on and demonstrating it for them. This is the experience 95% of the time.

She says she filed a police report about the incident, but police on Monday told SFGate Blog that they weren’t aware of it.

As the San Francisco news outlet pointed out, there’s been an upswell of anti-technology resentment in the city over the past year, with demonstrators blockading Google and Apple employee buses, complaining that the influx of highly paid tech workers has displaced the working class and affected access to affordable housing in the area.

In a world where income disparity continues to grow, you’ve got to use your head when you strap an expensive gadget to it.

You’re walking around with a face full of money. It’s money that’s both literal and metaphorical, so avoid being a glasshole and be aware of others around you.