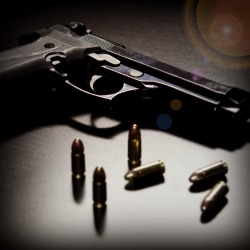 An increasing number of people are buying guns online, facilitated on platforms such as Facebook or Instagram, with no age or background checks required in the transactions.

That’s how a 15-year-old in the state of Kentucky did it.

In October, the boy was arrested on the Greenup County High School campus for carrying an unlicensed and loaded 9mm handgun to school.

When police asked the high schooler where he got the gun, his answer was Facebook.

In fact, according to a report from Mayors Against Illegal Guns which examined online gun listings posted between February and May 2013 on popular website, Armslist.com, 25,000 guns may have been transferred to individuals with criminal records, on just that one site, in just that one year.

It takes about 15 minutes to set up such a transaction on Facebook.

At any rate, that’s how long it took two Venture Beat reporters, who last week set up the purchase of a semiautomatic 7mm rifle and 90 rounds of ammunition from a guy named “Dave”, a member of the Firearms Only Alamogordo fan page on Facebook.

Rather, arms suppliers use the sites to advertise their goods and to set up chats with prospective buyers.

Black markets such as Silk Road – alternative places to illegally buy firearms – operate in the dark web, typically tucked away beneath vetting processes and accessed through the anonymising service Tor.

But the places where you can get guns fast, easily and without age or background checks are here in the bright, open light of the web.

On Facebook, for example, as Venture Beat reports, a quick search will send you to fan pages that don’t mince words: they include Firearms Only Alamogordo, Guns for Sale, I Love Guns, and Guns, Ammo & Blades.

Ebay doesn’t get away with this, because it’s a site that specifically conducts transactions.

But sites that aren’t doing that part of the deal – the ones that merely facilitate gun ads and the conversations between buyers and sellers – are not beholden to federal gun law.

Multiple petitions have been started to change site rules on gun sales.

One, a petition on Change.org, calls for Facebook and Instagram to prohibit gun sales. It had garnered 93,365 signatures as of Monday morning.

We need to tell Facebook loud and clear that allowing gun sales and trades -- which could easily put firearms in the hands of criminals and dangerous people -- is a threat to public safety and the security of our families. Other online platforms including Craigslist, eBay, and Google+ have already prohibited these sales and it's time for Facebook and Instagram to join them.

Facebook, for one, might not be an e-commerce platform, but it’s far from powerless when it comes to flagging illegal activities.

Case in point: look at how it catches would-be child molesters by analysing relationships and chat content.

It seems like a no-brainer that Facebook, or any site that’s facilitating illegal gun sales, should be able to turn the dials on that or similar technology until they’re also picking up on illegal gun sales.

Much to its credit, Facebook is, in fact, trying to figure this out.

As All Facebook reported last week, Facebook is now in talks with groups such as Mayors Against Illegal Guns and Moms Demand Action for Gun Sense in America, about the problem of enabling gun sales on its main platform and on Instagram.

Sounds good to me.

Craigslist et al. aren’t hiding behind the “we don’t do e-com!” shield when it comes to gun sales.

I can’t see any reason why other sites should keep tucking these activities beneath that limp excuse.

Image of gun courtesy of Shutterstock.