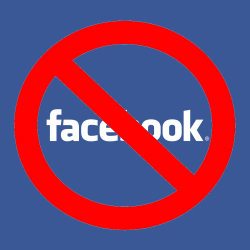 We received a tip off from a reader, Ramona, today about the latest Facebook hoax that’s doing the rounds.

Badly spelled and posing as messages from “Mark Zukerberg”, the images allege that Facebook is mounting both a “No Religion” and a “No Swearing” campaign.

Both campaigns apparently start in ten days time, on 20 March 2014. As of March 20/2014, we at Facebook will be launching a "No Religion" Campaign. Anyone caught spreading religious beliefs in any form will have their account locked, and further pending investigations may be held.

This due to the new laws issued by our legal department (section 182 P34b) as new advertisers and groups have petitioned for a "more logical" and "adult" social network.

If a user(you) continues to spread any form of religious propaganda will be shut down and a permanent ban will be placed into effect, immediately.

The “No Swearing” campaign is largely the same: As of March 20/2014 we at facebook will be launching a "No Swearing" Campain, Anyone caught using profanity will have their account locked further a pending investigation.

This due to the new laws issued by our legal department (section 182 P34b) as new advertisers have petitioned for a "cleaner" family friendly social network.

If a user continues to use profanity the account will be shut down and a permanent ban will be placed into effect immediately.

These aren’t real. Facebook isn’t banning religion from the site, nor is it putting a permanent account ban on anyone with a foul mouth.

Please resist spreading these hoaxes. They just cause concern for others.

You only need to look as far as the Talking Angela hoax that got a lot of parents worried recently that the cartoon cat was, in fact, hiding a secret paedophile behind her eyes.

The posts have spelling and grammar mistakes in them, which is often a clue that something is a hoax.

It also mentions new “laws” that have been implemented by Facebook’s legal department. Last time we looked, Facebook wasn’t able to set any laws.

Rules for using the site maybe, but not laws.

If you have any doubt in your mind, don’t spread these kinds of posts.

Read our three tips on how to avoid Facebook hoaxes, and if you’re still not sure if something’s a hoax or not, email us at tips@sophos.com and we’ll let you know.

Don’t forget to like us on Facebook to stay ahead of scams and hoaxes – it’s much better to share a helpful article with your friends than perpetuate an alarming hoax.