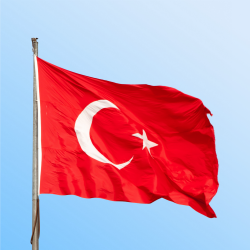 Last Friday the Turkish government slapped a ban on Twitter, saying that it had failed to comply with court orders imposed after some of its citizens used the social networking site to share allegations of corruption amongst high-level officials.

Finance Minister Mehmet Simsek, talking to the BBC, said that the banning of a social media site “doesn’t reflect well” on the Turkish government but was an action of necessity:

Ironically, since the ban was put in place, Twitter access has actually grown considerably. Digital agencies Brandwatch and WeAreSocial claimed a 138% increase in Twitter usage in Turkey soon after the ban.

→ Note: There does seem to have been an increase, but as Sophos Naked Security discovered, the figure of 138% might be an overstatement.

Initially, Turkish ISPs simply redirected traffic from Twitter’s homepage by pointing DNS servers to a government webpage which informed visitors why the service was blocked.

Protestors acted quickly and daubed government election posters and buildings with alternative IP addresses – such as 8.8.8.8 and 8.8.4.4 – which allowed users to connect to Twitter via Google’s DNS service for a while.

That means of access didn’t last for long though and the Turkish government soon began blocking Twitter by IP address too.

Users then found alternative means of accessing the social networking site, including the use of SMS messages and VPNs.

Twitter itself informed its Turkish users how they could get around the ban by sending tweets via SMS:

For most users this represents the easiest means of tweeting, but it may not be a viable option for long. Having already garnered support from the ISPs, it likely wouldn’t be too difficult for the government to ask its domestic telecoms companies to block such text messages too. The other alternative available to the tweeting Turkish public is the use of virtual private networks (VPNs), a technology that many are already familiar with as it is used in business, allowing employees to create secure connections from remote locations.

VPNs often cost money but one free option – Hotspot Shield – has seen a surge in usage with chief executive David Gorodyansky telling the Wall Street Journal that downloads in Turkey had jumped from an average of 10,000 per day up to 270,000 in the 12 hours after the Twitter ban was first announced.

Digital rights group, the Electronic Frontier Foundation (EFF), has also taken an interest in the situation, suggesting that users download the Tor Browser Bundle in order to circumnavigate the ban.

Such advice, along with instructions for using Tor presented in Turkish, may well have contributed to the massive increase in usage in the region which has seen the number of Tor users in Turkey jump from around 250,000 per day to over 400,000.

Such figures, in my opinion, suggest that Turkey’s response to criticism has been entirely inappropriate, not to mention completely ineffective.

A move designed to suppress allegations that were potentially damaging to the Turkish government has, instead, empowered the population to discover new methods of discovering the ‘truth’.

Even within Turkish politics there are signs of division with President Abdullah Gul taking to Twitter, of all places, to protest the ban:

The shutdown of an entire social platform is unacceptable. Besides, as I have said many times before, it is technically impossible to close down communication technologies like Twitter entirely. I hope this measure will not last long.

And, in the US, a White House spokesperson commented:

We have conveyed our serious concern to the Turkish government, urge Turkish authorities to respect the freedom of the press by permitting the independent and unfettered operation of media of all kinds, and support the people of Turkey in their calls to restore full access to the blocked technologies.

We stand with our users in Turkey who rely on Twitter as a vital communications platform. We hope to have full access returned soon.