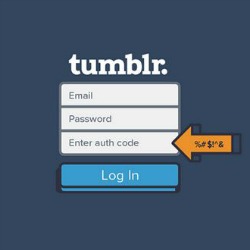 Tumblr has now joined its evolutionarily, ever-more security-conscious brethren by plugging in 2FA, it announced on Monday.

Two-factor authentication (2FA) is also known as multi-factor or two-step verification and is the process of verifying someone’s identity with two out of three possible identifiers:

Good for Tumblr. 2FA is a smart security step.

The point of 2FA is to make it tough for anybody – hackers, exes, overly dexterous pets, you name it – to get into your Tumblr account. Once set up, users will need to enter a unique single-use code every time they log in to Tumblr.

That code will be generated by an authenticator app – it recommends Google Authenticator – or received via SMS to a phone (which, as Tumblr wisely nagged/asked, you’ve already password-protected, right? … Ahem! Right? That security step is smack-dab at the top of Naked Security’s 10 tips for protecting your smartphone!).

2FA is already being used, to varying extent and in varying ways, by an ever-expanding list of sites, including Facebook, Google, Apple, WordPress, LinkedIn, and Twitter.

Tumblr put up a posting explaining how to set up and manage 2FA.

Here’s how to turn it on:

Good luck keeping safe and, well, you know, not blowing us all to kingdom come.

Want to learn more about 2FA? I dug through the treasure trove of TechKnow podcasts to pull out one that Paul Ducklin and Chet Wisniewski recorded on the subject about a year ago:

One comment on “Tumblr beefs up security with two-factor authentication”