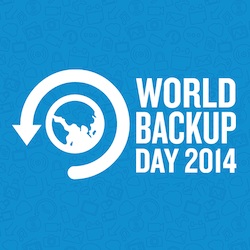 31 March is World Backup Day, a campaign to persuade us to be more careful about keeping backups of our precious data. The day’s catchphrase is “Don’t be an April Fool” – urging us to ensure we all have good backups in place in time for 1 April.

If your storage system fails, both in business or at home, any valuable data could be lost for good. So it’s essential to back up your data.

Important backups need to be kept separate from master copies. They should be stored on a different medium from the master, and in a different location.

They should certainly not be on the same hard drive, as that one device becomes a single point of failure for the whole set of data. Backing up files locally can provide a quick recourse in the event of accidental deletion, corruption or unwanted change, but you should think of them as spare copies rather than proper backups.

Proper backups need to be elsewhere – not just on a different device, but in a different location. On-site backups again have their place, but will be at risk from events that could take out the master too, such as fires or power surges.

If you back a CD up to another CD, a nasty outbreak of geotrichum candidum could take out both copies. SSDs and flash drives have different risk factors than magnetic platter hard disks. These risks can be mitigated by using multiple storage methods.

It’s not enough just to make a copy of all your eggs and put them in a different basket though. You need to make new copies frequently to keep the spare eggs fresh, and you need to check the basket is holding up well too.

If you keep using the same backup device for too long, the likelihood of it dying on you goes up and up.

You might think that all businesses would be aware of the need to securely backup their important data, but CryptoLocker has revealed issues at all kinds of firms and institutions, most notoriously including a local police department in the US.

CryptoLocker hammers home the importance of backing up for home users too.

We all have things we’d rather not lose – family photos or that half-written novel you’ve been working on – and it seems many people will pay out good money to get them back if threatened with their permanent loss.

It doesn’t have to be like that though. Backing up should not be daunting – the most precious stuff on your hard drive is likely to fit onto a handful of cheap DVDs or USB thumb drives, or a single fairly low-cost external drive.

If storage cost is an issue, remember that not everything on your computer needs to be backed up – things like music and movie collections might be annoying to replace, but unlike personal photos, sound recordings and home movies, they’re not irreplaceable.

For most of us, just putting these backups in a safe place at home will be enough, but if you want to go the whole hog, keep the backup somewhere else – at your workplace, at a friend or relative’s house, in a bank vault if you’re that way inclined – and you’re done, different medium, different location.

Remember though, if your backups are kept somewhere fairly public, it’s a good idea to encrypt them to make sure your files are kept private as well as safe from loss.

All that’s left is to repeat the process regularly. Monthly is a good target to aim for, but the more often you back things up, the less you’ll lose if there’s a disaster.

To reduce the workload of regular backups, a range of tools is available to make things easier for you.

For the sort of money CryptoLocker victims have been bullied into shelling out, they could probably have picked up an entry-level NAS (network-attached storage) system. More sophisticated versions will have multiple hard drives using RAID (redundant array of independent disks) to ensure data integrity even if one of the drives packs up.

If your storage device is accessible from your network it may be at risk from the same threats facing your master copies, including CryptoLocker, so consider only turning it on when you need to make or recall a backup. For extra security, disconnect yourself from the internet and check your system thoroughly for malware before connecting to the backup system.

Similar money will get you ample storage (for a while at least) at a cloud backup service. Many providers will offer limited space for nothing, some even give away more space as a reward for various things, such as introducing new users.

With these online systems, the location and hardware integrity problems are taken care of by someone else; the only question is whether you can trust the provider to keep your data both secure and private. You also need to remember to keep the account alive, usually by paying a regular fee.

The NAS and cloud approaches both have the benefit of allowing automated backing up on a schedule, assuming you keep the NAS always-on, or are lucky enough to have one which can be set to power up only during the backup time window.

So, if you’re not the sort of person who can maintain a regular regime of manual tasks, these technologies may be preferable.

If you don’t mind burning a disc or two, or popping in a USB stick now and then, of course do so. Maybe consider using both home-made and cloud backups to be doubly sure.

If you’ve never done a backup, follow World Backup Day’s advice and make 31 March the day you get started.

And while you’re doing it, sing the backing up song.

9 comments on “World Backup Day – are your important files backed up?”