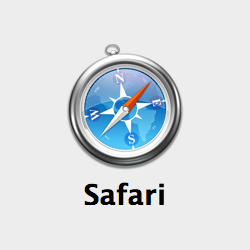 …we sort of forgot to write about Apple.

In fact, the “other operating system vendor” put out a mid-week update to its Safari browser, including new features and a lot of security fixes.

Two of the security patches stand out especially:

Those are the Safari flaws revealed just under a month ago on Day One and on Day Two at the PWN2OWN 2014 competition in Vancouver, Canada.

The Googlers were not only able to escape from Safari and get control, a so-called remote code execution exploit or RCE, but also to:

So, well done to Apple for getting those PWN2OWN holes closed within a month.

All in all, this update fixes 27 CVEs, of which 26 involve potential RCE, so each of these could have made a drive-by malware attack possible.

Remember that drive-bys are when simply looking at a web site, without clicking any download buttons or answering any “do you want to run this program downloaded from the internet” questions, is enough to get you infected with malware.

The 27th fix is for a sandbox escape, where a process inside the browser could trick the operating system into letting it access files it shouldn’t.

Get the update as soon as you can, if you’re not set up to grab Mac patches automatically: Apple Menu | Software Update...

Last time we wrote about OS X updates, we suggested that Apple would do well to adopt an update cycle that was both regular and frequent – just like Patch Tuesday.

Some commenters took exception to the idea.

One objection was that a monthly update cycle for Apple would inevitably and confusingly lead to months without updates, because Apple simply doesn’t have that many holes to fix over the course of a year.

But this update belies that claim, fixing as it does four CVEs from 2013, three of which date back to April 2013.

We also ended up last time with a hearty debate about whether OS X 10.6, nicknamed Snow Leopard, was still supported by Apple.

With no explicit word from Cupertino, we’ll have to use inference, and assume that continued absence of evidence for 10.6 support is evidence of its absence.

If you’re interested in (or inflamed by!) the issues of Windows-against-OS X, the optimal frequency for security patches, and how long operating system versions should be supported, you’ll enjoy this recent Sophos Security Chet Chat podcast.

Listen to Chester Wisniewski and Paul Ducklin give Microsoft-versus-Apple an informative and educational airing:

6 comments on “Apple updates OS X Safari – patches a year’s worth of holes, but not on Snow Leopard”