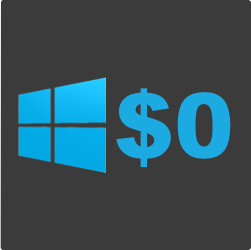 If you’re one of those XP users who thinks that Microsoft should support you forever, for nothing, this isn’t for you.

But if you’re a mobile device manufacturer, it might make you think twice about jumping on the Android bandwagon.

At least for some of your devices.

The “free Windows” announcement was made at Microsoft’s developer conference, called Build 2014, that took place at the start of April.

More on that in a moment.

I have a sinking feeling that we may all regret that nomenclature when the first monthly update for Windows 8.1 Update comes out.

We’ve argued long and hard that Apple ought to follow Microsoft when it comes to the update process – for example: monthly (and every month, if you please), augmented as necessary in emergencies. Apple picks something fairly easy to say and remember.

Apple has used edgy types of cat, for example, or a serious surfing break, like Lion or Mavericks, as monikers for the series of releases in each 10.x family.

Imagine, then, that Windows 8 adopted types of coffee drink in its naming, so Windows 8.1 might become, say, “Windows Cold Press.”

→ Cold Press is where you steep your coffee grounds in water at room temperature for 12-18 hours, instead of in water at 90C for 3-4 minutes. Try it. You end up with excellent coffee; you just have to plan further ahead.

Then Windows 8.1 Update would be Cold Press 8.1.1, which would sound groovier.

And Windows 8.1 Update updates would be something like “the latest monthly updates for Cold Press 8.1.1”, which would sound much clearer.

But back to your free copy of Windows 8.1 Update. Microsoft is evolving its Windows business model to enable partners to offer lower-cost devices in the highly competitive smartphone, tablet and PC categories. Microsoft will offer to hardware partners $0 Windows with services including a one-year subscription to Office 365.

So you have to be an OEM or ODM (original equipment or design manufacturer – a company that designs or makes computer hardware), which rules out home or business users of XP.

There’s another catch, mentioned elsewhere in the press release, namely that this is:

a $0 royalty licensing program for OEM and ODM partners developing smartphones and tablets with screens under nine inches.

Does the explicit limitation to “smartphones and tablets” mean OEMs can only get Windows Phone, or can they get regular Windows 8.1 Update for free, too?

Does it cover Windows built for Intel chips, or will you need the more locked-down flavour for ARM processors, Windows RT?

We’ll have to see how the precise details pan out, and whether or not this attracts mobile device vendors away from Android.

Sadly, however, the headline of this article notwithstanding, you still have to buy Windows 8.1 if you want to switch up from XP on a regular computer.

On the other hand, if you’re a bank, and your ATMs have screens smaller than 9″, perhaps this is the ideal way to make the great leap forward from XP or XP Embedded without worrying about licensing costs?

PS. If you had a 230mm screen, which converts to 9-and-55-thousands of an inch…do you think you’d qualify?