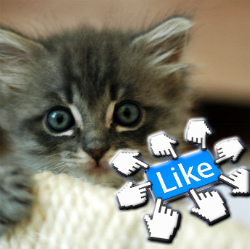 Many of these clingy, whiny, needy stories are published by Pages that deliberately try to game Facebook’s News Feed to get more distribution than they normally would, the company said.

Facebook’s illustrated this category with a typical post: it shows a quartet of favorite-animal suggestions, including photos of a fuzzy, belly-up bunny (“Like”!), a cutesy-wutesy kitten pawing at the air (“Share!”), some funtastic airborne dolphins (“Comment!”), and a blood-engorged mosquito (“Ignore!”).

Users report that like-baiting stories such as this one are 15% less relevant than other stories with a comparable number of likes, comments and shares, Facebook says, and drown out relevant content from friends and Pages that people actually care about.

Resharing great content is one thing. Resharing to the entire Facebook Nation with the latest kitten video is another.

Facebook says that when photos or videos are uploaded over and over, people grow a bit numb, finding the content less relevant, and they have a tendency to gripe about the Pages that go on posting sprees. Hence, Facebook’s tweaked its News Feed to de-emphasize these oversharing Pages.

Facebook points out that some stories in News Feed use inaccurate language or formatting to try to trick people into clicking through to a website that contains only ads or a combination of frequently circulated content and ads.

Facebook used an example of stories that claim to link to a photo album but instead take the viewer to a website with just ads.

But spam links can be more dangerous than that, as we saw in December when cloned Facebook accounts were hitting up friends with spam and money requests.

Spam links can link to malware that infects victims’ computers with all manner of nastiness, but Facebook’s recent update trims these links out of News Feed.

This is only the latest in Facebook’s ongoing battle against pollution of its news feed. As it is, the integrity of the Facebook Like counter has been in question for years.

For example, in 2012, Facebook popped the bubble on fake Likes, causing the Pages of Lady Gaga, Eminem and Rihanna, among others, to sag.

That was good work. It meant taking on malware, compromised accounts, duped users, and purchased bulk Likes, as well as networks of zombie accounts run by bot masters.

Back in 2012, mere days after the popping of Lady Gaga et al.’s Like bubbles, Facebook turned right around and admitted that it was scanning private Facebook messages to boost “Like” counters on third-party websites.

Who can complain, though, really? If Facebook’s de-spamification program gets those whiny/grabby/needy/”Like-Share-Comment-or-you’re-pond-scum” posts out of the News Feed, I say kudos to tightening the screws on the algorithms.

What would be even better: a less annoying and more secure Facebook.

We don’t promise dolphins or fuzzy wuzzy widdle kittens (apart from this one), but we can at least assure readers that no adorable animals were harmed in the making of this post.