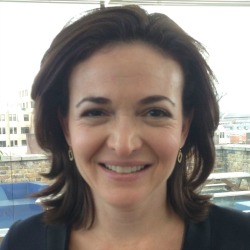 Facebook Bigwig Sheryl Sandberg wants us all to know that, targeted advertising or no, the Zuckerbergians are hovering over our private data like an anxious mother bird protecting her fluffy nestlings from voracious advertising raptors.

Anyway, that’s the gist of what Sandberg said when BBC Breakfast asked the chief operating officer whether Facebook might lose users who don’t like the “Big Brother” element of targeted advertising:

Privacy is of the utmost concern and importance to Facebook, and it's important to us that the people who use our service know that we are very protective of them. It is their data, they have control of it, they share it. When we are able to personalize ads, we are doing that without sharing their private data with any advertisers.

Facebook just marked its 10th anniversary, which we commemorated with an overview of 10 years of security and privacy thrills & chills.

The council was set up to help Facebook executives and small businesses cooperate in improving links with social media and advertising.

Speaking to business executives from the UK and Ireland, Sandberg said that the missions of Facebook and small and medium-sized businesses are “inextricably tied” – easy to see, given how many companies communicate with their customers via Facebook.

From her BBC Breakfast interview:

Sandberg also predicted a fast-approaching future in which the word “online” is going to seem rather quaint. We’re getting to the point where we’re always going to be online, she said.

Is that because Facebook plans to implant neural tubes?

No, not yet. Rather, it’s because mobile phones are keeping us constantly plugged in, she said:

We're in the middle of the fastest adoption of disruptive technology we've ever seen, and that's the adoption of the mobile phone.

The word 'online' is getting to be an old-fashioned word. We're all going to be connected all the time.

This is a good thing, she said.

Being active on Facebook means people have a good chance of having stronger personal relationships, because they’re able to use technology “for something that matters to them.”

And here is where we hand over the megaphone – well, OK, the comments section – to our many readers who won’t touch Facebook with a 10-foot pole.

Do you lack strong personal relationships because of your lack of Facebook? Do you feel that you still manage to use technology in a meaningful way?

We’d love to hear your thoughts.

Also, for those of you who are on Facebook, we say Lean In – to security! If you like Naked Security’s Facebook page you’ll be able to share information on threats and discuss the latest security news, be it malware, privacy or targeted ads.

We don’t target you for advertising – just for security news!

Image of Sheryl Sandberg by cellanr [CC-BY-SA-2.0], via Wikimedia Commons