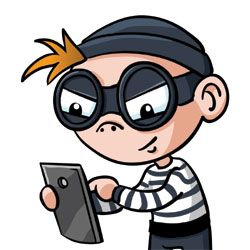 We carry wallets, purses, address books, and briefcases. If police in the US arrest us, they’ve long had the authority to search this type of wearable, portable stuff.

So why should mobile phones be given special protection from warrantless search?

They shouldn’t, the US Department of Justice (DOJ) said in a brief filed with the Supreme Court on Tuesday in which it argued for warrantless phone searches.

In fact, the DOJ maintains, a phone is like any object or package that a police officer can seize because it could be a weapon or destructible evidence, whether it’s a crumpled cigarette wrapper (could conceal a razor blade) or “fruits or evidences of crime.”

This is the side of US law enforcement that wants to conduct warrantless searches and wants to do it fast, before arrested people have a chance to wipe their phones or brick them entirely using a kill switch.

The other side of law enforcement has, of course, been demanding kill-switch technology as a way to discourage mobile phone theft.

The law-enforcement coalition Secure Our Smartphones (SOS) calls such robberies a growing epidemic.

New York City, for example, saw a 40 percent year-over-year increase in smart phone robberies from 2012 to 2013.

The coalition’s state attorneys general, district attorneys, major city police chiefs, state and city comptrollers, as well as public safety activists and consumer advocates, all think that bricking a phone will make it less of a lure.

In what civil liberties groups call a paradox, the DOJ in this case doesn’t care so much about thwarting robberies.

As far as this case is concerned, the Feds are far more concerned about not being able to get at evidence that’s easy pickings when police don’t have to fuss with getting warrants.

This is how DOJ attorney Donald B. Verrilli, Jr. described the situation in the brief:

If an officer does not search an unlocked cell phone as soon as she finds it, a significant risk exists that the police will never be able to recover evidence contained on the phone.

The case concerns alleged drug dealer Brima Wurie, whom police arrested in 2007 after what they allege was a crack-cocaine deal that took place in the parking lot of a convenience store in South Boston.

Police took two mobile phones from Wurie. One of them was receiving incoming calls while the police had it, so the officers opened it up to check out his call log.

Then, they looked up the caller ID to find out what phone number was associated with it.

The officers plugged the phone number into an online white pages directory, found the address to which it corresponded, went to the house, “froze” it until they could get a search warrant, and then, after getting a warrant, found guns and crack cocaine.

The US Court of Appeals found that the phone search was out of line with the Fourth Amendment to the US Constitution, which restricts unreasonable search.

The Center for Democracy and Technology and the Electronic Frontier Foundation have argued that warrantless searches of cellphones for evidence represents a serious violation of the suspect’s privacy beyond that of a usual warrantless search of a suspect’s pockets, backpack, or car interior.

Verrilli wrote in the Supreme Court brief that such warrantless searches are necessary in this day and age, when criminals are getting ever more savvy about remote wiping, encrypting or phone bricking.

He cited a California case in which a drug-trafficking organisation had procedures in place to deal with phones getting intercepted:

[They] admitted that they had a security procedure, complete with an IT department, to immediately and remotely wipe all digital evidence from their cellphones.

It’s only going to get worse, the DOJ said:

Because remote-wiping capability is widely and freely available to all users of every major mobile communications platform, individuals have used the same tactic. ... That problem will only increase as mobile technology improves and criminals become more sophisticated.

The DOJ argued that even if the Supreme Court decides to nix warrantless search on an entire phone, police should still be granted access to phones’ call logs, given that they fall under what’s known as “third-party doctrine” – i.e., individuals lose their “reasonable expectation of privacy” for information shared with a third party such as the phone company, and the Fourth Amendment’s prohibition on warrantless searches no longer applies.

If this Court were to draw a special exception from that settled doctrine for information on cell phones ... it should at least preserve officers’ authority to review information in which the individual lacks a significant privacy interest, such as information that is also conveyed to telecommunications companies.

What matters isn’t just the information, but where they get it from … They’re saying that there are certain things on your phone that have less protections than others under the law, which is crazy.

What do you think? Do you think it’s unreasonable for police to flip open a buzzing phone?

Image of criminal with phone courtesy of Shutterstock.