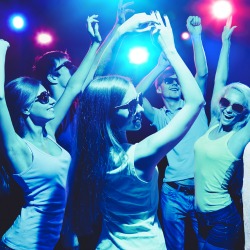 When Canice Ejoh, 17, of Brampton, Ontario, asked his parents if he could invite some friends to their mansion on Friday night, they said yes.

It was supposed to be a party of about 60 – a small group, considering that, well, it’s a mansion.

Or, rather, it was a mansion, still under years-long construction.

Now it looks like it’s a set for a sequel to Project X, the 2012 film about a house party gone terribly, social-media-ishly wrong.

The damage to the house reportedly included about 8 broken windows.

People were climbing ladders to get in, according to The Record.

Photos posted on Twitter show hundreds of people crammed up the stairs and spilling out of the 5,000-square-foot house: The Daily Mail shows photos of the aftermath, including what once must have been a lovely wrought iron banister but now looks like it was attacked by metal-eating moths.

The new décor comes courtesy of taking one mansion, adding some teenagers, and stirring in the hashtag #MansionParty.

According to the Daily Mail, 60 police cars showed up to break up the party, with police having been called in from every district in Ontario.

A neighbor who lives across the street from the mansion said that the mansion owners’ son had informed them about the party on Friday morning.

He told (us) that they were just going to have a small party.

The neighbor said there was a lineup of cars on the street at one point, and “packs” of teens in groups of 10 to 20 were walking up to try to get into the already-stuffed house:

From my window, I could see there was literally no room to walk in the house.

Police first heard of the party when it started trending on Twitter. Several calls were also placed to police to complain about the noise.

When they showed up, they found about 200 cars parked on the street.

Damage is estimated at $70,000 (over £41,000). Police reportedly made several arrests for intoxication and for assaulting police officers, as partygoers gleefully posed in front of police cruisers for photo opps.

It’s probably not much of a consolation to the Ejoh family, but for what it’s worth, at least the house wasn’t furnished.

That means they won’t have to deal with vomit-saturated rugs, as the Seale family did when their son threw a party that was publicly (oops!) posted on Facebook and wound up trashing their £1 million London home.

Of course, none of this is necessarily Canice Ejoh’s fault. When we invite people into our homes, nowadays we should all ponder the possibility of our guests bringing ticking time bombs stashed in their purses and pockets.

I’m talking about mobile phones, of course, which enable partygoers to spread the invitation to any yahoo on the planet via photos and updates on Twitter and on public Facebook posts.

And of course, you can always stay up to date on internet threats by liking the Naked Security page on Facebook.

But how in the world do you keep your guests from tweeting your party? Do we have to ask our party-goers to leave their mobile phones at the door?

Image of party courtesy of Shutterstock.