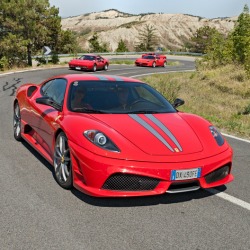 A top cybercrime boss has offered up a sports car to the hacker who comes up with the best online scam, according to the head of the European Cybercrime Centre (EC3).

Speaking to the Independent on Sunday, Troels Oerting said that the Ferrari was one of many gifts offered to young talent via a video posted online.

The professionally produced clip, a sort of ’employee of the month’ promotion, featured the Ferrari and a Porsche, as well as “a couple of blondes and a guy saying: those who make the most money can get this car”.

Oerting, who is also currently acting Head of Europol’s Counter Terrorism and Financial Intelligence Centre, said that 85% of cybercrime now originates in Russian-speaking countries – an area where law enforcement has typically found it challenging to prosecute those responsible for attacking Western targets.

Speaking about the difficulties of bringing cyber criminals to book, he said:

They are very, very good at locating themselves in jurisdictions that are difficult for us. If we can pursue them to arrest, we will have to prosecute by handing over the case. Even if they will do it, it's a very cumbersome and slow process. You can wait until they leave the country, then get them. That's a comparatively small volume. The police ability stops at the border. We are also seeing signs of movement to African countries when the broadband is getting bigger. We will probably see more from places we don't want to engage with.

Oerting also warned of a two-tier Europe in which the wealthy can pay to protect themselves, while those less well off may be unable to afford protection and, therefore, are much more vulnerable to identity theft and other online crimes:

We have 28 different legislations but we have one new crime phenomenon. If you're rich you live in a nice place with a fence around it with CCTV, but if you're poor. ... On the internet, some will be able to protect, some will not.

The offer of flash sports cars was, he said, a sign of just how far global cybercrime bosses would go in order to attract and retain the best technological minds.

With the best programmers at their disposal, cyber gangs are becoming increasingly creative in their approach – Oerting cited a case in which five debit cards were purchased for $500. Though they each had a fixed withdrawal limit, the gang were able to convert them into credit cards which had no such block on them.

They then cloned the cards and, over a period of a few hours, used those multiple pieces of plastic to steal around $45 million from card machines all around the world.

He said that Europe would have to look for new ways of fighting cybercrime given the sharp increase in fraud that was costing Britain billions of pounds every year:

In real cybercrime, [we're going after] the people who develop and distribute the malware. We are trying to find them and identify them. It's like cutting the snake's head off. But there are a lot of heads, and they grow back very quickly.

Organized crime has not just embraced this but integrated cybercrime into its business.