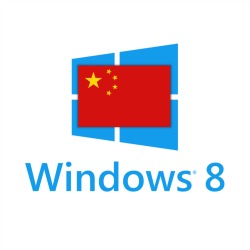 China is banning the use of Windows 8 in government departments, with an announcement from the country’s Central Government Procurement Center nicely timed to add to the sizzling diplomatic row between China and the US, the “mincing rascal” which has had the temerity to accuse Chinese military officers of involvement in industrial espionage.

The main factor in the decision appears to be cost, however, with a member of staff at the procurement center telling local press that negotiations with Microsoft had failed to reach a satisfactory agreement, and that the decision was made several weeks ago.

Given that the idea has been on the table for some time, it seems unlikely that the ban is intended as a direct retaliation against the US, although it’s fairly likely to put a dent in Microsoft’s stock prices.

It’s also more than possible that the announcement was pushed out at just the right moment to add to China’s general display of diplomatic outrage at the US DoJ’s spying accusations.

There has been additional speculation that the move may reflect growing concerns over the security of US-made equipment and software after yet more revelations about NSA snooping, themselves seen as a reflection of similar suspicions about Chinese tech provider Huawei.

In another twist on the security angle, some have implied that the move may be intended to avoid another death-of-Windows-XP type calamity, with much of the world apparently taken by surprise by Microsoft’s long-planned ending of support for the aged platform.

XP still holds 70% of the Chinese market and features on “most” government systems, according to Xinhua, which claims that the Windows 8 ban should be seen as a demand for a “domestically designed OS”.

There are a swathe of Chinese-focused Linux distros available, but no clear Ubuntu-style people pleaser, and even were one to emerge soon and be championed by China’s vast governmental infrastructure, it’s going to take it a long time to dominate the consumer market in the way Windows XP currently does.

For a full commercial OS, the development and uptake times are likely to be even longer.

So it could be that the move to ban Windows 8 actually creates the ideal circumstances for another XP debacle a few years down the line.

Windows 7 is seen by many as a natural successor to XP, similar enough for most users to pick up in no time, featuring many of the security features of Windows 8 without the off-putting and occasionally baffling front-end features which are being rapidly rolled back by later update releases.

Windows 7 is permitted for use in China’s government, and once people are eventually persuaded to give up on XP, it’s likely they’ll head to Windows 7, assuming the costs are acceptable – OS piracy is thought to be on the high side in China, to say the least.

Windows 7 is no longer the fresh young face on the block though, with official support due to end in less than eight months, although extended support of the kind that recently ran out for XP should be good until 2020.

Globally, up to 50% of desktops are now running Windows 7, a number likely to climb further as XP is finally rooted out.

If Microsoft cannot persuade people to carry on the upgrade momentum and move on again in the next few years, it’s fairly certain we’ll hit that end date and hear another round of complaints about having to give up on a familiar, trusted and reliable platform.

Unless they’re willing to put some serious financial and ideological support behind efforts to build popular, usable alternatives, the Chinese government ban is unlikely to solve the XP problem, and may well be laying the groundwork for another round of woes in five years time.

On the other hand, if they just wanted to annoy Microsoft and the US, they’ve probably done a good job.