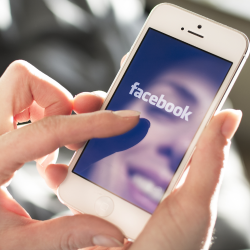 There’s a funny TV commercial you may have seen lately, where an elderly woman is showing a group of her lady friends photos literally pasted to her living room wall.

“Instead of mailing everyone my vacation photos, I thought I’d save a ton of time by posting them to my wall,” says the sweet old lady.

The joke, as we all know, is that sharing to your Facebook wall means something else all-together.

It’s been 10 years since Facebook gave the world a reason to share everything with everyone – but the social media giant is finally acknowledging that not everyone is clear on the concept.

In a big announcement, Facebook said it is making changes to its website and iPhone app that will give users “more power and control” over audiences for their updates.

The big switch will now make sharing only to Friends the default for new users of the service, who – up until now – had their News Feed posts set to Public. “We recognize that it is much worse for someone to accidentally share with everyone when they actually meant to share just with friends, compared with the reverse,” the company acknowledged in its news release.

There will be more new privacy features rolled out over the next few weeks that Facebook says will give all users additional tools, reminders, and “privacy checkups” to walk users through their privacy settings.

You can expect to see more of the little blue Facebook privacy dinosaur popping up on your profile.

Over the next few weeks, we'll start rolling out a new and expanded privacy checkup tool, which will take people through a few steps to review things like who they're posting to, which apps they use, and the privacy of key pieces of information on their profile.

Facebook is also changing the design of its web interface and iPhone app to make the privacy setting more visible at the top of the status update window for each post.

On Facebook for iPhone, the audience you're sharing a post with is now at the top of the screen, and on web, people will see a simplified audience selector.

We're testing and rolling out similar improvements in other places people use Facebook.

Another important new feature will give users a pop-up warning when they are about to share something publicly, just as an additional check against over-sharing.

These updates follow closely on Facebook’s introduction of another privacy enhancing feature that will give users more control over the sharing of data with websites and apps that allow you to log in with Facebook – called Anonymous Login.

We may chuckle over that funny ad and those sweet old ladies who don’t understand how Facebook works.

But our privacy isn’t a joke, and Facebook is finally, hopefully, recognizing that the opt-in model makes for more informed users – that’s real power and control.