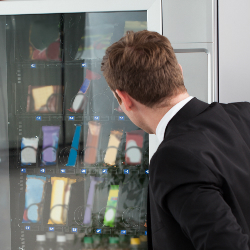 Imagine this: you walk up, ready to quench your thirst with some high fructose corn syrup, and the beverage vending machine decides to draw on its internet-enabled access to cloud services and data analytics to take your image with HD video, guess your age, discern your gender and then target-market you.

Or, according to the press release:

The Register’s Simon Sharwood on Friday wrote up his experiences with perky vending machines from Intel and Microsoft.

Sharwood went to a recent Microsoft-hosted demonstration in Sydney where he became intimate with a fridge made by the local Coca-Cola bottler.

The sugar-water-stocked machine was taking photos of people in the vicinity, superimposing wigs on their heads and exhorting them to buy a drink – “all without obscuring the sweet, sweet, beautifully chilled beverages within, thanks to the use of a clear display.”

Then, in Tokyo on Thursday, he got to stand in front of one of Intel’s units, which guessed his age and gender, in order to better target its animations at subway visitors.

Sharwood writes that, according to Intel’s demo, coffee appears to be a better suggestion for men.

The Intel machine put Sharwood into the rather broad age range of 20-39, which pleased the writer, who’s about to turn 46.

Microsoft, for its part, recently announced Azure Intelligent Systems, a cloud-based service designed to manage Internet of Things (IoT) devices, collect the data they produce, and route it to tools; think business intelligence and related data-crunchers.

Of course, they’re just joining the fray that includes more and more of the biggest tech giants who are now gleefully internet-enabling our formerly stupid appliances.

A recently released SEC (Securities and Exchange Commission) filing shows that Google expects advertising to creep into every crevice of the IoT.

In other words, say good morning to your house! From the sounds of it, someday soon it will know when you’re up and out of bed and ready to be marketed at.

Rumor has it that Apple is poised to mix it up in the IoT with Google, with plans to announce a new software platform that would turn an iPhone into a remote-control platform for lighting systems, home security, kitchen gadgets and the like.

Of course, the IoT presents a whole new world of security risk.

As Naked Security’s John Hawes noted recently, with the advent of the IoT comes the prospect of being at risk not only of attackers snooping on the data passing between us, the cloud-based service broker who handles it, and our devices – we’re at risk of attackers taking over those data channels and hijacking the devices themselves.

Beyond those risks, the data flowing from these devices is potentially going to be ever more intimately, intrusively concerned with our private selves, from when we’re at home, to the hours we’re asleep, to what type of vending-machine snack we prefer: Cheesy? Chewy? Purchased at what hour of which day? From which we can surmise you were in transit through what part of the city?

Once such data is in the hands of a cloud service provider, there’s always the possibility that it can be subpoenaed away by our (very data-hungry) governments.

There are, of course, business-smart reasons for internet-enabling vending machines.

Vending machines are, as Microsoft has pointed out in its marketing efforts, prone to getting wonky in humid conditions.

Outfitted with environmental sensors, they’ll be able to flag upcoming problems to a vending machine operator before those problems materialise.

So yes, smart vending machines might make sense for some things, including the logistics of keeping them up so they can keep spewing snacks or weak coffee.

But they’ll also be fully capable of spying on us.

We’ve already seen the likes of spying sidewalk contraptions in the form of London’s spying rubbish bins, which were set up to identify and remember people’s smartphones, and thereby the movements and habits of their owners, as they walked by.

That’s kind of like how web pages monitor site traffic, just a whole lot creepier, given that you didn’t have to visit a site to get monitored. All you had to do was blithely walk by.

This is not to say that vending machines are in fact tracking our mobile phones. London told the smart rubbish bin company to knock it off.

But say hello to your beverage vending machine anyway, since these latest demos show that it could well be watching you – with great interest!

Image of man at vending machine courtesy of Shutterstock.

10 comments on “Say hello to your vending machine – it might be watching you!”