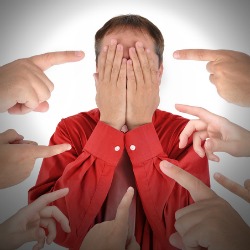 The ‘We know what you’re doing‘ website is still out there, still collating our ferociously embarrassing, publicly posted Facebook updates.

Think posts that mention how much we hate our bosses, how hungover we are, what drugs we’re taking, or what our new phone number is.

And oh, look – the site’s now offering a Foursquare location finder tool, in case people who publicly broadcast their locations haven’t already had their homes ransacked while they’re away.

(Of course, it was predated by the similarly Foursquare-fueled, perfectly named site ‘Please rob me‘.)

But are those sites really enough to get it through our thick skulls that what we post publicly online is going to hang around, potentially causing us to lose our jobs, our dignity, or maybe our valuables?

What we really need is a site that tries to get our attention by sending us photos we posted way back in the olden days when we didn’t know any better.

That, in fact, is what Myspace has done, in a seemingly desperate attempt to convince people that it still exists, to intrigue former users, to embarrass them, and/or to send them hurtling back to the site on search and destroy missions.

According to Mashable, Myspace is sending emails with one or two cobwebby photos and a line that reads:

The good, the rad and the what were you thinking...

…along with a link that takes users to their likely creaky old profiles.

How the formerly social networkishly delicious has fallen: it was the most-visited social networking site from 2005 until early 2008, surpassing Google in June 2006 as the most visited website in the United States.

But while it lacks the visibility nowadays, it’s still got the photos.

Mashable reports that Myspace has 15 billion user photos in its database, and still appears to be popular among music lovers.

That pales in comparison with the 250 billion photos Facebook had as of September 2013, but, well, it’s still plenty of embarrassment to spread among plenty of users.

Welcome to the internet, where nobody forgets.

(Unless you’re European and Google answers your pleas to blip you out of e-existence!)