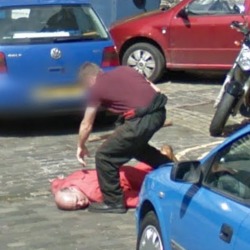 Flashing is a classic.

But come on, flashing’s just not all that classy. At least not for Edinburgh garage owner Dan Thompson, 56, who opted instead for the “homicide via pick axe” scenario.

Thompson found himself having to apologise recently when the resulting image received a complaint from a web user. The image shows Thompson lying face down in the street as an obedient employee – that would be Gary the mechanic – gets captured by the Google car in his faux homicidal guilt-hunch.

Or, as Thompson put it:

... Pretending to give me a massage with the pick axe handle.

Thompson says his road is U-shaped. When he saw the Google Street View car pull in on one side, he knew he had about 30 seconds to pull his prank.

That was in August 2012. Some locals called the garage to laugh at the jokers when they spotted the image online, but it took the police over a year to saunter over after having received a complaint.

More than a year later, a couple of policemen came around the corner, grinning slightly, saying, "Do you know anything about this?" We said, "We're bang to rights on this, that was us."

Fortunately one of the garage’s customers is a constable at the local station. She’d seen the image and knew it was the garage guys “up on a windup,” Thompson said:

They weren't exactly coming around in blues and twos expecting to find a bundle of red rags with a skeleton inside. They went off roaring in laughter in a few minutes.

Little that did to stop the duo from being identified, though.

We can’t really use this case to determine whether or not Google’s blurring ensures our privacy, given that police were already well aware of who might be wearing a red jumpsuit directly in front of a garage owned and staffed by known pranksters.

But there have, in fact, been loads of complaints about blurring being insufficient since Street View first rolled out. Some of them are tongue-in-cheek, such as:

This easily deciphered image well could have cost Thomas the Tank Engine his job at Legoland, notes Redditor YouBoxEmYouShipEm:

Well, he had called in sick that day.

More seriously, incidents of privacy invasions have resulted in calls to shut down Street View.

The BBC iterated some of the incidents leading up to one such call in a 2009 article, including:

In fact, soon after the launch of Street View, the human rights watchdog Privacy International sent a formal complaint about the service to the UK Information Commissioner’s Office (ICO), which cited more than 200 reports from members of the public who were identifiable on Street View images, including a man being sick after having a few too many and a picture of a man entering a sex shop in London.

At any rate, Thompson says he’s sorry he wasted constables’ time – the police around his neighborhood are “very good,” he said, and his antics meant they had to drop round to see what was going on.

If you stumble upon an objectionable image on Street View – phony or real – here’s how to report an image, according to Google:

Google then promises to promptly review the report.

Been embarrassed by cameras whirring around your neighborhood? Heard about any good crime-foiling abetted by Street View?

Please do feel free to tell us your own stories in the comments section below.