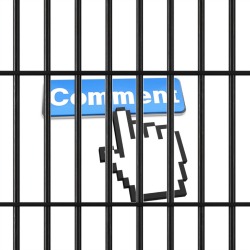 A Facebook troll who posted disgusting messages about the classroom killing of a much-loved UK teacher, Ann Maguire, has been jailed for six weeks.

Ms. Maguire, who was 61 at the time of her death and mere months away from retirement, was stabbed at Corpus Christi college in Leeds, West Yorkshire, on 28 April.

Three days later, Jake Newsome, 21, wrote that the 15-year-old boy accused of murdering her “should have p***** on her too”.

personally im glad that teacher got stabbed up, feel sorry for the kid... he shoulda p***** on her too

The Guardian reports that Newsome, from Leeds, pleaded guilty at the city’s magistrates court last month to sending an offensive message.

He was jailed when he appeared before a district judge on Wednesday.

Newsome had admitted to officers that he put the message on the site, but he claimed that he didn’t think it was offensive.

According to the Daily Mail, Newsome’s attorney, Ann Glen, told the court at an earlier hearing that Newsome empathised with the alleged murderer:

He felt that there were some similarities as to what people were saying about the young man and the background that this defendant has.

She also said that her client had no previous convictions and he understood he would “reap the consequences, realising that he had offended members of the public”.

US readers who aren’t familiar with other countries’ laws regarding freedom of expression might be taken aback by Newsome’s imprisonment.

UK citizens have the right to freedom of expression under common law, but there’s a long list of exceptions to that right, among which are threatening, abusive or insulting words or behaviour meant to harass, alarm or distress others.

What you post on social media can come back to haunt you.

In many countries, that haunting may involve jail time – a good thing for would-be trolls to remember.