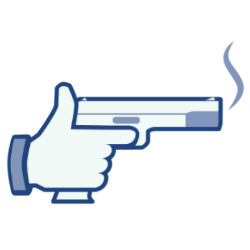 Kids can be street-smart and Facebook-stupid, to paraphrase how Vice News put it.

In fact, it was a long trail of quite helpful Facebook postings about crimes that lead New York City police to what authorities are calling “the largest gang takedown in New York City’s history”.

After a 4-year-long investigation by the New York Police Department (NYPD), 103 gang members were indicted on Wednesday, thanks mostly to the evidence teenagers left on their Facebook profiles.

Five hundred NYPD officers descended on two housing projects in the NYC neighborhood of West Harlem Wednesday morning to arrest 40 of those who were indicted.

.@CommissBratton: Great work & coordination by the #NYPD this morning in West Harlem. pic.twitter.com/rMf68bNkas

Police told reporters that 23 more alleged gang members are still being sought, while the rest were apprehended prior to the Wednesday bust.

Most of those arrested are between 15 and 20 years old, while some were as old as 30.

Prosecutors say the boys and men belong to three gangs: the two allied gangs of Make It Happen Boys and Money Avenue, and their rivals, 3 Staccs.

The gangs have waged war over the past four years, with the carnage now resulting in accusations of two homicides, 19 non-fatal shootings and about 50 other shooting incidents, according to a press release put out by Manhattan District Attorney Cyrus R. Vance, Jr.

According to the indictments (which can be read here and here), the gang members fought tooth and nail to control their territory – the two housing projects are only a block away from each other – and to climb the gangster hierarchy via shootings, stabbings, slashings, assaults, gang assaults, robberies, revenge shootings, and murders.

They were also busy chronicling it all via social media, posting hundreds of Facebook updates, direct messages, mobile phone videos, and calls made from Rikers Correctional Facility to plot the deaths of rival gang members.

They used postings to publicise and claim credit for – and to rub their enemies’ noses in – their crimes, prosecutors say.

One of the gangs’s victims – 18 year-old Tayshana “Chicken” Murphy – was a promising basketball star. Her father has said that she was being recruited by several colleges.

Ms. Murphy was gunned down in her building in September 2011. One of the gang members allegedly bragged about it on Facebook.

A second victim, Walter “Recc” Sumter, who owned the gun used to kill Ms. Murphy, was murdered that December in apparent retaliation.

Prosecutors say that two days after the death of Ms. Murphy, alleged gang member Davon “Hef” Golbourne wrote to a 3Staccs rival that they had “fried the chicken.”

In fact, investigators pored over more than 40,000 phone calls between gang members already in jail and those on the outside, hundreds of hours of surveillance video, and “more than a million social media pages,” Vance said in his statement.

According to Vice News, the word “Facebook” shows up 162 times in one of the indictments and 171 in the second.

Rev. Vernon Williams, a Harlem pastor who has spent years trying to curb youth violence in the neighborhood and who personally knows many of the indicted teens, told Vice News that they’re not the brightest bulbs on the tree when it comes to social media:

Because the stuff that they were saying, that was gonna come back to bite them, especially admitting participating in crimes, admitting getting the weapons that were gonna be used in crimes, and then calling someone in a state prison and giving them a report of what they did.

But while the kids were undeniably stupid about Facebook, Williams also criticised the law for letting this battle wage for so long instead of stepping in earlier:

The indictment is almost 200 pages long and I would say 75-80 percent of [one of the indictments] is Facebook posts and similar activity.

The DAs office was helped by the accused. All [the police] did was watch and document it. I don’t know what took them so long, but once they had enough, they scooped them up.

That is a very good question. Why did police need four years to round these guys up when they had alleged criminals posting about it on social media?

Stupidity about social media is a gift to investigators. One would hope that the gift gets turned into protection for the community as fast as practicable.