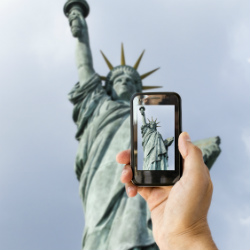 The US Marshals Service last week reacted by swooping in and snatching those records out from under the ACLU’s nose just hours before they were supposed to review them.

After the Feds seized the surveillance records, US Marshals then moved the physical records 320 miles away, meaning the ACLU wouldn’t be able to learn how, and how extensively, police use snooping devices.

The ACLU promptly filed an emergency motion to get local police to disclose the records, which detailed how police had used a stingray to track nearby phones to a suspect’s apartment without getting a warrant.

A stingray is a surveillance device that sends powerful signals to trick cell phones – including those of innocent bystanders – into transmitting their locations and their IDs.

The ACLU called the records grab an “extraordinary attempt to keep information from the public”.

Even a former judge and a former United States magistrate judge found the US Marshals’ action “weird” and “out of line”, they told Ars Technica.

Former US magistrate judge Brian Owsley had this to say:

This one is particularly disturbing given the federal government's role in coming in and taking all of these records that were at issue in a state open government act.

In order to spirit away the records, the ACLU explains, the US Marshals waved a wand over Sarasota police detective Michael Jackson and transmogrified him – and the records – into their own property:

The Sarasota Police set up an appointment for us to inspect the applications and orders, as required by Florida law. But a few hours before that appointment, an assistant city attorney sent an email cancelling the meeting on the basis that the US Marshals Service was claiming the records as their own and instructing the local cops not to release them. Their explanation: the Marshals Service had deputized the local officer, and therefore the records were actually the property of the federal government.

The Sarasota detective created the applications, brought them to court, and retained the applications and orders in his files. Merely giving [the detective] a second title ('Special Deputy US Marshal') does not change these facts. But regardless, once the Sarasota Police Department received our records request, state law required them to hold onto the records for at least 30 days, to give us an opportunity to go to court and seek an order for release of the documents.

Last week, Ars Technica reported how use of the stingray in a Tallahassee, Florida, rape case only came out once testimony from a local police officer was unsealed.

The detective had told the court that he would only testify about how the stingray was used if his testimony was not made public.

That’s because, the assistant attorney general told the court, the police were under a non-disclosure agreement (NDA).

Late last Tuesday, the judge ordered unsealing of the entire transcript of the suppression hearing.

The ACLU published the portion that, it says, the government tried to keep secret.

The ACLU says the released information “confirms key information about the invasiveness of stingray technology”, including that:

I agree with a commenter on Ars’s coverage, CQLanik, who noted that if a local police department can’t allow the public to know the shady methods used to come by their evidence, then that method shouldn’t be legal:

People have a right to face their accuser, and that right is being taken away by the use of secret evidence gathering.

Image of Statue of Liberty courtesy of Shutterstock.

10 comments on “Feds swoop in, snatch mobile phone tracking records away from ACLU”