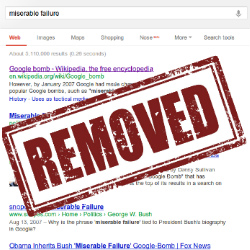 Google may be forced to forget about you, but it just might stick a flag on the search results it’s reluctantly expunged.

According to The Guardian, the search giant plans to put an alert at the bottom of every page where it’s been compelled to remove links in the wake of the recent, landmark “right to be forgotten” court ruling.

Last month, at the command of the EU’s Court of Justice, Google reluctantly put out a “forget me” form to enable European Union citizens to request that it remove links that include their name and that are deemed “inadequate, irrelevant or no longer relevant, or excessive in relation to the purposes for which they were processed.”

By the end of the first day, 12,000 Europeans had submitted the form.

According to the Financial Times, those familiar with the search results removal process say that the takedown requests are coming in from across the EU, with a particularly high proportion coming from Germany and the UK.

The requests reportedly include one from a man who tried to kill his family and wanted a link to a news article about it taken down.

Other requests have come in from a politician with a murky past and a convicted paedophile, the Guardian reports.

Google chief executive Larry Page has said that nearly a third of the 41,000 requests received related to a fraud or scam, one-fifth concerned serious crime, and 12% are connected to child pornography arrests.

The Guardian says that Google plans to flag censored search results much like it alerts users to takedown requests over copyright infringing material.

When links have been removed from a list of search results, Google provides a notification at the bottom of that page and links to a separate page at chillingeffects.org, an archive of cease-and-desist notices meant to protect lawful online activity from legal threats.

On the site, each listing displays the name of the complainant, the title of the copyrighted content and a list of allegedly infringing URLs. The site at the link given above, for example, lists 640 URLs that allegedly infringe on Walt Disney’s “Maleficent” film.

Google considers the enforced expunging to be censorship, and it’s got some heavyweights on its side.

Wikipedia founder Jimmy Wales has condemned the ruling, telling Tech Crunch in an interview over the weekend that it was a “terrible danger” that could make it more difficult to make “real progress on privacy issues.”

Wales is one of a seven-person advisory committee set up by Google to issue recommendations about where the boundaries of the public interest lie in the requests.

Wales told Tech Crunch that in spite of the tens of thousands of people eager to have their pasts erased from search results, the ruling simply amounts to censorship of knowledge, packaged in “incoherent legislation”:

In the case of truthful, non-defamatory information obtained legally, I think there is no possibility of any defensible 'right' to censor what other people are saying.

We have a typical situation where incompetent politicians have written well-meaning but incoherent legislation without due consideration for human rights and technical matters.

I’ve asked Google if it will begin placing notifications on pages where it has removed links due to “right to be forgotten” requests. I’ll update the story if any comment is forthcoming.

Images from Shutterstock and Creative Commons.