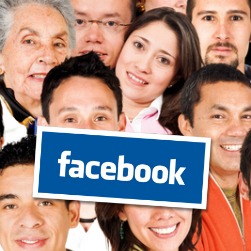 Those are the personality traits – openness, conscientiousness, extraversion, agreeableness, and neuroticism – that psychologists use to describe human personality.

After I clicked a button, Five Labs’ new tool, released last week, went to work crunching my Facebook blitherings, and then it offered to crunch all my friends’ verbiage, as well.

(Warning: NSFW, given its addictiveness. You’ll get sucked in, and we’ll never hear from you again.)

It presents the results in a warped pentagon, with each side assigned a percentage based on how much your personality reflects each of the five traits.

Here’s mine overlaid on the warped pentagon of my almost doppelgänger, Bill Gates: In fact, with the click of a button, you can scan your friends’ Facebook personas, as well.

You can also choose to compare your results with that of not only Mr. Gates, but Mark Zuckerberg and Barack Obama.

If you’re thinking “targeted marketing on steroids,” join the club.

As the Washington Post noted, this type of tool could mean big bucks to advertisers, who could use it to get inside our heads and craft ads that appeal to us based on our psychological profiles.

The tool was inspired by a study conducted at University of Pennsylvania and published in September 2013 in PLOS One journal.

The researchers found linguistic patterns in the volunteers’ Facebook posts, pointing to the use of some words being strongly associated with certain personality traits, as well as gender, age and location.

For example, volunteers who lived in high elevations often talk about the mountains; neurotic people disproportionately use the phrase “sick of” and the word “depressed”, and males more often use the possessive “my” when mentioning their “wife” or “girlfriend” than females use the possessive with “husband” or “boyfriend”.

When it comes to personality traits such as the Big Five, this figure illustrates typical language associated with extraversion (e.g., “party”, “chillin'” or simply a string of exclamation points) and introversion (e.g., “computer”).

The researchers found that the models they created to analyse language used in Facebook postings are “surprisingly accurate” – for example, they hit the target 92% of the time when predicting users’ gender based only on the language of their status updates.

Those models are the same upon which Five Labs based its Facebook analysis tool, which will be released as a mobile app in August, using data from volunteers, reports the Washington Post.

Nikita Bier, the founder of Five Labs, told the newspaper that after the tool got inside participants’ heads via their Facebook postings, the biggest response was:

This is kind of creepy.

Bier reassured the newspaper that the company doesn’t plan to sell users’ data or use it to create targeted ads.

In fact, the company doesn’t keep user data at all, Bier said.

That’s sort of reassuring, at least in the short term.

Companies need to be upfront with how private data is being used and allow users to then opt out, said Andrew Schwartz, the University of Pennsylvania researcher who advised Five Labs on its project.

It's important that people know how their private data is being used and consent to it. People probably want to know if an advertisement, for example, was specifically selected for them based on their personality ... it's important such applications have policies to inform people how their data is being used and provide means of agreeing to such use.

It’s hard to imagine that marketers and big data brokers won’t want to cash in on the concept of language analysis sooner or later.

And at that point, expect them to be able to get even further inside your skull than they do now.