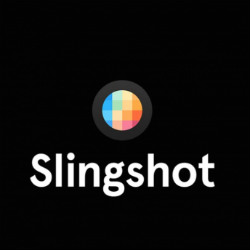 Slingshot is Facebook’s “disappearing” image answer to Snapchat – the the app that got away.

A lot, as in, the all-cash, $3 billion deal with which it tried to buy Snapchat last autumn.

It’s not hard to see why: content that disappears promises a brave new world of repercussion-free posting: sexting without the fear of sextortion, posting things that otherwise could get you fired, boasting about your gang’s felonies without posts getting used in court documents, that sort of thing.

Yes, Facebook wanted its users to experience that unfettered life – and to post way more because of it.

But Snapchat turned up its nose at the offer. So Facebook said fine.

Then, it went off and cooked up its own version. Slingshot has more going on than Snapchat when it comes to getting users engaged in messaging back and forth.

But one thing that Slingshot and Snapchat do have in common is nothing to stop recipients from capturing supposedly disappearing content by grabbing screenshots or taking photos of your snaps with other cameras.

Is there any way of preventing recipients from taking screenshots of Slingshot messages?

Huffington Post’s Bianca Bosker writes that Snapchat’s creators, for their part, have tried to discourage the practice by tattling on anyone who takes a picture of someone else’s snap.

Bosker reports that it’s worked, at least in her circle of Snapchatters, where screenshotting a Snapchat message is perceived as being similar to reading someone else’s text messages when she leaves for the bathroom:

It's feasible, but freaky and in poor form.

Unfortunately, if it’s feasible, it will happen, regardless of peer pressure.

Relying on recipients’ etiquette to refrain from screenshotting is in no way a technological barrier.

On the recipient’s device, will images be encrypted? Will they be stored in memory and implicitly disappear when viewed, as opposed to “hidden” in a directory?

Snapchat assigned the extension .nomedia to filenames – a standard Android marker that told other apps to ignore the file, to not index it or thumbnail it, to refrain from adding it to galleries, or the like.

Also, Snapchat added a record to its own database to say that the image should be treated as though it doesn’t exist.

None of those ploys stood up to computer forensics, which managed to find those “disappeared” files just fine.

In May, Snapchat agreed to a settlement with the US Federal Trade Commission (FTC) over its hazy relationship with user privacy and the fact that it fibbed about those images that “disappear forever.”

We don’t yet know how Facebook will go about making images supposedly depart this world and flit off to digital heaven.

I sent my questions to Facebook who responded with this statement from Rocky Smith, Slingshot Engineering Lead:

Slingshot is for sharing everyday moments with all of your friends at once, not a way to send sensitive information. We don’t see it as a messaging app but instead closer to a feed full of spontaneous moments.

Viewing and Dismissing Shots. Once you view and dismiss a shot, you can no longer view it in the app. If you react to a shot before you dismiss it, the original shot will appear with your reaction. Also, shots and reactions can no longer be seen in the app 30 days after being sent even if they haven’t been viewed or are unlocked and marked to view later.

Hopefully, Facebook has learned from Snapchat’s mistakes and constructed a service in which content truly does go up in a puff of smoke, leaving no trace.

There’s no way to stop people from screenshotting your images on Snapchat, or Slingshot.

So, with that in mind, I’d suggest following the same advice that Naked Security offered with regards to Snapchat: if you don’t want to risk an image being in circulation forever, consider not even taking it in the first place.

3 comments on “Does Facebook’s Slingshot commit true imagicide? Or is it another Snapchat?”