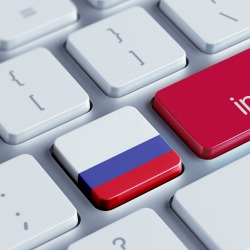 This would mean the likes of Google and Facebook would need to set up datacenters within Russia and redesign their operations so that individual user data would only be stored inside the country. Failure to do so could mean the site being blocked to prevent Russians using it.

If the proposal is accepted by the parliamentary process, it would give companies until September 2016 to comply.

The reasons behind the move remain a little vague, but Liberal Democrat politician Vadim Dengin, one of the bill’s main proponents, has been quoted by local press as claiming that data on Russians stored by web services “can be used against the country as well as against a specific individual”.

It seems likely that the bill is at least in part a response to the massive worldwide internet snooping carried out by the NSA and other intelligence agencies, aiming to minimise foreign spies’ access to information on what Russians are up to online.

But it will also give Russia’s own intelligence services much easier access to data on its own citizens, avoiding the need for complex and potentially controversial efforts to snoop on foreign-based datacenters.

Russia has been gradually chipping away at online freedom and anonymity for a while now, mainly in the name of combating extremism, but their efforts have been seen by many as attacks on dissenting voices opposed to the ruling regime.

Recent moves include requiring bloggers to register themselves and conform with openness requirements, and demanding internet firms share detailed information on their users with law enforcement whenever requested to do so.

A prominent Russian politician has also recently called for David Cameron-style web content filtering to protect sensitive Russian youth from decadent Western adult material, seen by many as a clear move towards censorship and another brick in Russia’s emerging China-style “great firewall”.

Last year’s Winter Olympics also saw an upturn in monitoring of foreign visitors to Russia and how they used the web and phones.

This latest move may well prove problematic for web firms, who would face the choice between the massive logistical effort and financial input required to relocate their data into Russian territory, and to filter the transfer, storage and analysis of data appropriately, or risk losing access to Russia’s huge online population.

Indeed much of the criticism the bill has so far faced from within Russia has been on economic grounds, arguing that the requirements of the bill would be too costly for internet firms to be workable.

The cost to Russia of further separating itself from the online world could be even higher though, both financially and socially, if it finds itself shut out of the ever-growing global digital economy thanks to its isolationism.

The cost to the world could be high as well, with Russia already a major source of online crime, recently cited by a leading UK police official as the biggest cybersecurity threat to Europe.

Hackers will always find a way around connectivity and anonymity hurdles put in their way, if there’s enough money to be made, and any further damage to international relations and impediments to tracking down crooks will inevitably lead to an increase in criminal activity.

The internet needs openness and freedom to do its job of connecting the world. Trying to fight its influence with censorship and regulation is not good for anyone.

Image of Russian flag on keyboard courtesy of Shutterstock.