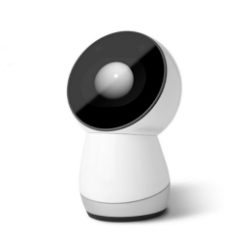 Jibo is a recently announced, crowd-fundable, simply adorable “social” Internet of Things robot whose fortes are emotional communication with you and your loved ones, and massive data collection.

He’s poised to smile, dance, and giggle his way into our hearts, our homes, and hopefully not into the lucrative position of pawning data about where we like to shop.

The robot, which looks like a Furby with one golfball-sized eyeball that’s had its ears and fur boiled off, has the functionality and emoting capability of a tripping iPad.

Jibo is a hub for learning, entertaining, text/email/voice message conveying, reading your recipes out loud, taking photos of your family that you actually get to be in, facial recognition to enable that, and artificial intelligence that tailors its answers to you, albeit in a robotic tone.

Jibo can hide with your children under their blanket fort and read them stories, morphing its spherical eyeball into illustrations and chirping in cartoonish alarm when the blanket collapses on them.

“Oh, there you are,” it will exult when the tots re-emerge, which is more comforting than fictional robots, which are always trying to go back in time to kill our parents or which keep trying to feed us toast.

Her new startup, Jibo Inc., kicked off a crowdfunding campaign to launch Jibo on Wednesday.

According to IEEE Spectrum, Breazeal decided to launch via crowdfunding because she and her crew can’t possibly explore all of Jibo’s possibilities by themselves and therefore are inviting developers in to create new apps – or skills, in the case of a robot.

Jibo is, in other words, a development platform.

Just like Google, Apple and Samsung want to be at the heart of all that juicy data flowing from health and fitness apps, or like how Google bought Nest to find out things that might include, for example, when we’re home, Jibo’s going to be merrily gyrating to music while grinding all sorts of personal data about us.

Tom, one of the commenters on IEEE Spectrum’s story, posted a list of interesting questions, some of which were – I assume?! – tongue-in-cheek, plus some true chin-rubbers, including:

Jibo’s makers have taken privacy into consideration. Or at least, that’s what its FAQ says, though details aren’t forthcoming as of yet:

Guarding our users' privacy is something we take very seriously. We work hard to protect your information from unauthorized access and have designed policies and controls to safeguard the collection, use, and disclosure of your information.

The company told me that it plans to post a response to questions about security on its blog soon.

In the meantime, pre-orders for these puppies are now being taken, at $499 for a home version and $599 for a developer edition.

Planning to get one? Or planning to wait until you hear a bit more about the privacy guards than the two-sentence FAQ?

6 comments on “Introducing Jibo: adorable home robot or the Eye of Sauron?”