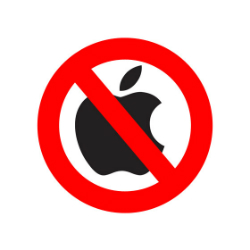 The latest: According to reports, China has banned Apple products including iPads and MacBook Pros, stopping government officials from buying the gadgets to avoid the US hijacking them to spy on Beijing.

The move is far from surprising, given the atmosphere of suspicion and outrage in the wake of Edward Snowden’s NSA disclosures – a poisonous climate being stoked by continuing leaks, hypothetically coming from a second mole in the US intelligence community.

Last month, China claimed that iPhones are hazardous to state security, given their ability to track and time-stamp users’ whereabouts.

The fear, uncertainty and doubt coming from state-run media such as the TV station behind the iPhone security report – has since rippled out to the US, where Apple was slapped with a class action suit last week for allegedly tracking users without consent.

The suit was filed by a woman who claims she’d never heard of the tracking until she saw the CCTV report.

As readers noted in the comments to the “iPhones are hazardous” story, Apple’s iOS terms and conditions clearly state that location data is collected and used.

But facts aside. China’s collective outrage is undoubtedly fueled by Snowden disclosures about NSA surveillance – most particularly the NSA’s having planted backdoors into hardware to facilitate spying.

Put that on top of both Canada and the US having recently openly accused China of state-sponsored hacking, and it’s easy to see how the country would be itching for payback.

The antipathy between China and US should sound very familiar.

Huawei comes to mind: the company’s telecommunications products were effectively banned from use by government contractors in 2012 when Washington’s intelligence community, without solid evidence, raised flags about the possibility that the equipment could be used in espionage.

In fact, it sounds like the Huawei shoe is now firmly on the other foot, and Apple’s just the latest to get a swift kick to the curb.

Image of MacBook courtesy of Shutterstock.