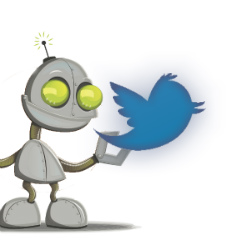 In its latest quarterly filing to the Securities and Exchange Commission (SEC), Twitter broke down its user base, saying that up to 8.5% of its monthly active users – about 23 million – are automatons.

Up to approximately 8.5% of all active users used third party applications that may have automatically contacted our servers for regular updates without any discernable [sic] additional user-initiated action.

Does that mean that 23 million Twitter users are actually bots?

Twitter clarified that number with Engadget, saying that that 8.5% of accounts might not be restricted only to bots, but could also include automated processes such as publications’ own Twitter feeds.

Bots, or, more specifically, Twitterbots, are programs that produce automated posts on Twitter, automatically follow Twitter users, or acquire instant followers for anybody who wants to pony up the money to buy them.

Often, they serve up spam, enticing people to click on promotional links.

One example is @EarthquakesSF, a bot that live-tweets earthquakes in the San Francisco Bay area using real-time seismographic information from the US Geological Survey.

Other good-citizen bots post whenever someone edits Wikipedia from a US Congress or UK Parliament IP address.

And then there are those bots that simply tweet lovely, surreal strings.

One of my favorites is Not New Scientist, which concocts delicious things like this:

Reports of new anaconda killings hint that Edward Snowden is in trouble.

Reports of new anaconda killings hint that Edward Snowden is in trouble.

But regardless of whether a Tweetbot is serving mankind by mashing up Edward Snowden with anacondas or whether it’s plaguing us with spam, what really matters, from a shareholder/fiduciary standpoint, is that none of them are real humans, and thus Twitter’s viability as an advertising platform could be diluted by their presence.

In other words, as noted by Slashdot commenters, as a publicly traded company, the number of automated and potentially fraudulent Twitter users is most definitely the SEC’s business.