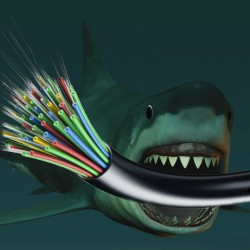 Google has to wrap its trans-Pacific underwater fiber cables in a Kevlar-like material, because sharks are quite partial to having a munch on them.

Dan Belcher, a product manager on Google’s cloud team, said that the company goes to great lengths to protect its infrastructure, including wrapping underwater cables to protect against shark attacks, NetworkWorld reports.

In fact, Google has a good amount of infrastructure to protect.

The company last week announced that it was investing in a new, $300 million undersea fiber optical cable system running between the US and Japan, called FASTER, that’s designed to provide much higher broadband speeds to countries in Asia.

This isn’t the first time that sharks have gnawed on underwater cables.

A 1987 story from the New York Times describes how an experimental fiber optic cable laid off the Canary Islands a few years earlier was being chomped on.

It wasn’t hard to figure out the source of the damage, given that sharks tend to leave teeth behind, embedded in the objects they taste.

Sharks continually shed teeth and then grow new ones to replace those left behind in undersea cables or in things they can actually eat.

Google’s description of fiber cable says the fragile glass of each strand of fiber is put into a protective casing to protect it from breaking.

A polyurethane jacket goes over the whole bundle, but just underneath is a protective layer – what Google says is Kevlar-like protection.

“Kevlar” is a brand name for a synthetic material of high tensile strength-to-weight ratio, which makes it 5 times stronger than steel on an equal weight basis.

Kevlar, a DuPont invention, has been used to replace steel in racing tires, bicycle tires and racing sails, as well as in body armor.

If sharks manage to bite through it, we will let you know.

But for now, assume that those responsible for any throttled bandwidth issues you might experience are likely not finned.

Composite image of cables and shark courtesy of Shutterstock.