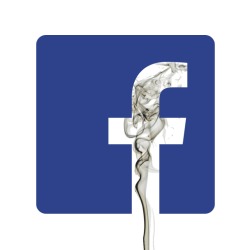 Marijuana users around the world heaved a sigh of relief and went back to ordering pizza delivery after it was revealed that the “Facebook Drug Task Force” (FDTF) and its new militarized corporate police force were a hoax.

The satirical news site National Report posted a story on Monday saying that starting 1 October, Facebook would begin monitoring all postings and messages so as to arrest users who buy and sell narcotics using the site.

On Wednesday, a subsequent story described how Facebook’s corporate police had been armed with federal armaments and Mine-Resistant Ambush Protected (MRAP) vehicles, received in return for sharing the company’s “crime database” with the feds.

As the Wednesday story told it, the FDTF had arrested two men who were being held in the “first corporately held jail cell on the grounds of Facebook Headquarters” in Menlo Park, Calif.

But wait. Wasn’t this supposed to start on 1 October?

The Metro reported that “thousands” of weed enthusiasts were “feeling quite gullible” for falling for the gag stories, though I could only turn up a few messages that hadn’t yet been deleted by those with egg on their faces.

@xkrustmnx and anybody else who fell for the FDTF satire mustn’t have noticed the enormous school of red herrings swimming around in these stories.

For one thing, both stories offered up a phone number that was purportedly a 24-hour hotline to answer questions or comments about the drug task force.

Anybody who actually called it would find themselves connected to the Westboro Baptist Church: a US church known for its strenuous anti-gay activism, including plans to stage a protest at the funeral for deceased actor Robin Williams because he portrayed a gay man in “The Birdcage”.

I'm thrilled. We're going to get all the drug pushers and dope addicts off Facebook once and for all. The marijuana junkies think they can socialize on the line with their fellow druggies, well, not on my watch. We're gonna read their messages, we're gonna build cases against them, and we're gonna put 'em all in prison. It's going to be beautiful.

Of course, the biggest red herring of all – more like a red humpback – was that, apropros of nothing in the article, the first story ended by referring to an announcement Facebook made this week about adding “Satire” tags to users’ postings.

The satire tags would mark stories from sites such as The Onion, Clickhole, Empire News and, of course, National Report itself, hopefully alerting the masses of gullible people who share them, thinking that they’re real.

I noticed yet another hoax that sprang out of the National Report’s earlier hoaxes.

Somebody on Facebook calling themselves the PC Doctor rightly called the FDTF story a hoax and presented a subsequent hoax: NO ONE CAN MONITOR ANY FORM OF COMMUNICATIONS OF YOURS (EMAIL, VOICEMAIL, TELEPHONE, CHAT, VOIP, FACEBOOK, YAHOO, ETC.) WITHOUT A COURT ORDER. EVEN FACEBOOK THEMSELVES CANNOT DO SO AS IT IS A VIOLATION OF YOUR RIGHTS.

The PC Doctor’s hoax was a little dangerous, given that there are people who actually might believe that there are no entities who monitor communications without a warrant.

It’s bad enough that so many people use laughably lame passwords or don’t use them at all, thus leaving themselves open to things like wardriving kitties mapping where you can get free Wi-Fi in the neighborhood.

Of course, the past Snowdenized year has seen plenty of stories about surveillance without warrants.

When it comes to automatically scanning messages and postings, recent headlines have included both Microsoft and Google having detected child abuse images in email, with arrests resulting.

For its part, Facebook was praised in 2012 when it used its little-known data monitoring technology to spot a suspicious conversation about sex between a man in his early thirties and a 13-year-old girl from Florida.

Of course, if it so chooses.

Is it planning to do so at any time?

Who knows? It’s not doing it now, at any rate.

This is how a spokesman described the FDTF story, according to The Metro:

Images of smoke courtesy of Shutterstock.