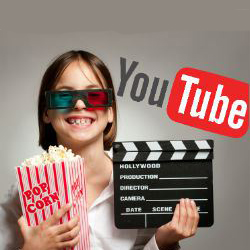 Google’s so keen on getting underage advertising targets children onto its services, it’s even mulling how to clean up the swamp that is YouTube.

According to a report from The Information, the data-dealing big boy is contemplating how to roll out the child-sized red carpet with these new offerings:

Details, such as the timeline of when we’ll see these things, are scarce.

But the Wall Street Journal did speak to someone familiar with Google’s plans who confirmed that the company earlier this year was working on a preteen version of YouTube that would let parents control content.

At any rate, it’s not surprising. Google certainly isn’t the only online service that wants to suck tots into its advertising maw.

Both Google and Facebook currently ban preteens from using their services.

In reality, the number of kids who log in to Facebook every day is estimated to be in the millions.

Recently, Facebook’s plans to let kids sign up with parental authorisation, as opposed to just slipping through the cracks by lying about their age, came to light when a patent application for a system that lets children create accounts with parental supervision was made public.

The challenge for any of them – Google, Facebook or whoever – will be satisfying the restrictions and protections that govern youngsters on the web.

COPPA, a 1998 US law, governs what kind of information companies can collect on kids under 13.

Whatever ways that Google intends to make its services child-safe will likely have to satisfy the US Federal Trade Commission (FTC), which enforces COPPA.

As it is, in November the FTC shot down a proposed verifiable parental consent method submitted by AssertID – an identity verification technology vendor – under COPPA.

Basically, the FTC wrote in a letter to AssertID, users can easily fabricate Facebook profiles.

It’s also extremely difficult to verify that somebody who says they’re a parent is actually, in fact, a parent.

The FTC would thus probably have to sign off on any new method that Google – or Facebook – comes up with for proving a parent’s identity.

Other sites that collect children’s information accomplish that by requiring parents to prove their identity via credit cards or faxed ID documentation.

Google’s reportedly working on a legal and kid-friendly solution to all of this.

Let’s hope that the effort to clean up some of its seedier sides pays off, as it has for Facebook.

Up until last year, when Facebook finally decided that rape jokes and gender hate speech were turning it into a dark alley you wouldn’t want to walk down alone, never mind let your kids play in, you could find pages that extolled some pretty nasty stuff,.

The idea of Google making things child-friendlier isn’t such a bad one.

But can it do so while refraining from data-mining our kids to the extreme?