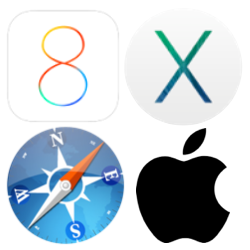 Apple doesn’t have Patch Tuesdays, but it does have Update Surprisedays.

Like Naked Security, you probably received notification of seven updates from Apple this week, spread over Wednesday, Thursday or both, depending on your timezone:

Be warned – there’s a lot of updating in there: I’m a Mavericks user with Xcode and Safari, and those three updates totalled about 3.5GB.

Admittedly, I like to go for Apple’s OS X Combo updates when I can, which for OS X 10.9.5 includes all the files needed to update from any 10.9.x version, including the original 10.9 release.

The Combo updates are much larger (982MB this time, instead of 275MB for the package that can only update you from OS X 10.9.4), because they include files that were already part of previous point releases.

Combos are a handy insurance policy against needing or wanting to reinstall OS X from scratch.

You can go from an original OS X 10.9 installer straight to the latest-and-greatest version without having to apply and reboot into all the intermediate point releases along the way.

The updates for iOS and OS X differ inasmuch as they are pitched for features and security respectively: Nevertheless, plenty of the security patches in OS X 10.9.5 are also part of iOS 8.

Even if you don’t want the new features in iOS (and there really are hundreds of them, from Camera to Siri and from a new Health App to slicker sharing on iCloud) you’re well advised to take the update for the security fixes alone.

The list of bugs isn’t so much an attractive reason to move forward as a compelling, almost disconcerting, reason not to lag behind.

More than 40 separate vulnerabilities have been fixed, covered by 55 CVEs; 10 of these could allow remote code execution, including 3 inside the kernel.

In fact, there is something of a laundry list (or a vulnerability glossary) of holes fixed, including:

Happily, one of the “bugs” that was “patched” was to fix security holes in other people’s behaviour.

As we wrote back in June 2014, Apple decided to stop its iDevices giving you away automatically to any Wi-Fi access point you walked past.

If your phone is looking for an access point to connect to, it transmits its Media Access Code (MAC) address in every packet it sends out over Wi-Fi.

The MAC is a unique string of six bytes programmed into your network card; although it doesn’t necessarily identify you, it does tell an establishment like a shopping mall or a department store that the same person who just bought cotton trousers in Menswear is now browsing near the organic yoghurt section in the Food department.

Marketers love that sort of information, not least because it can be harvested without you realising, even if you never actually connect to any of the access points dotted around the store.

So, in iOS 8, the operating system uses random, made-up MAC addresses when searching for access points, switching to your real hardware identifier only when you actually decide to connect.

→ Apple will still know where you are, of course, and can use that information to target you with ads. But your relationship with Apple is much clearer cut, because you have already chosen an Apple device running Apple’s software.

As we mentioned above, many of the iOS patches are also in the OS X Mavericks 10.9.5 update, because OS X and iOS share a great deal of source code.

→ Some of the iOS fixes don’t apply, of course – OS X doesn’t have the iPhone’s lock screen code, for example.

By the way, one important aspect of this batch of updates, if you have both OS X and iOS computers, is that the Safari update for Macs is delivered separately.

In contrast, the latest version of Safari is packaged right into the iOS update.

So, if you are like me and prefer to download the Combo update for OS X and install it yourself, remember that you still need to visit Apple Menu | Software Update to get hold of Safari 7.1.

In OS X Mavericks, Software Update is orchestrated by the App Store, which is the only place you can get Safari releases these days.

If you are an OS X user (as mentioned above, Mavericks, Lion, Mountain Lion and OS X Server all get official fixes), you really do want this update.

There are many serious and now-known security holes that are well worth closing.

In combination, those can make a deadly cocktail for attackers who want to get into your network.

If you are an iOS user, the security reasons to update are just as compelling, and we expect that most people will grab iOS 8 right away.

Just remember, though: in Apple’s modern world view, the iOS path runs forwards only, so there’s no going back if you don’t like iOS 8, at least not easily.

We therefore encourage you to update, but if you have corporate apps that are vital to your job, we also advise you to check with your IT guys first (or with the makers of the apps if you don’t have an IT team).

If in doubt, check your apps out.

5 comments on “Apple ships a sevenfold security surprise, including iOS 8 and OS X 10.9.5”