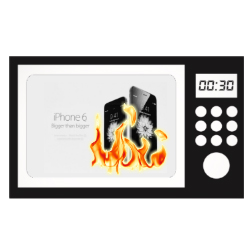 Back in 2012, one YouTube user demonstrated in a video that charging an iPhone 5 in a microwave oven had the tendency to set the crackling phone on fire after 40 seconds, after which it burst into a ball of flames.

Three minutes of microwaving didn’t help the battery level much – particularly considering that by then, the fried phone would be dead, flame-broiled, and removable only by spatula after hosing it down.

Charging-via-microwave was looking like it had evolved considerably in a non-lethal direction for Apple’s new iOS 8, with Apple’s new wireless “Wave” technology promising to interface with a device’s radio-baseband, thus allowing it to sync with microwave frequencies to charge its battery.

Unfortunately, it wasn’t meant to be, given that the preceding paragraph is full of dribble that comes from hoax marketing materials released over the weekend. Wave is our latest and greatest addition to iOS8. Wave allows your device to be charged wirelessly through microwave frequencies. Wave can be used to quickly charge your device’s battery using any standard household microwave.

The pretty convincing marketing graphic which promotes Apple’s latest “Apple Wave” technology, is, in fact, brought to us courtesy of the rollicking tricksters over at 4chan.

Heating a phone in a microwave will not charge a device running iOS 8.

Not only will microwaving an iPhone – or any phone – or any chunk of metal – not work, it will also destroy the iPhone. Nor will your microwave enjoy the experience, as is evidenced by the sad, blackened box that immolated the iPhone 5 in the video above.

Of course, none of that has stopped 4chan users from tweeting out the fake flyer under the hashtag #AppleWave.

A number of iPhone users have supposedly fallen for the trick, though I’m very suspicious of whether the photos going ’round the Twittersphere as purported evidence of the con’s effectiveness aren’t in fact borrowed from the video Mr. Toasty iPhone 5 posted two years ago. Who else need a new iphone and microwave?

Remember, don’t believe the hype. The iPhone 6 is just a phone and iOS 8 just an operating system.

Its new features don’t include the ability to break the laws of physics.

It’s just one more lesson that we can’t believe everything we read on the intertubes, even if it uses the same Myriad humanist sans-serif typeface with distinctive “y” descender and slanting “e” cut, just like a true Apple marketing blitz.

And while we’re at it, would somebody please tell these poor frogs that the worms on that iPhone display aren’t real?

Composite image of iPhone 6, flames and microwave, courtesy of Shutterstock/SGM.

15 comments on “No, ‘Apple Wave’ does not let you charge your iPhones in the microwave”