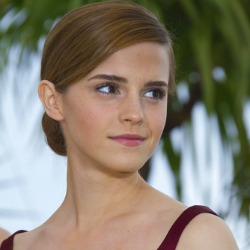 Over the weekend, Emma Watson gave a lauded speech to the UN about gender equality.

In the speech, under the auspices of her role as a UN Goodwill Ambassador, she expressed support for the HeForShe campaign: an organization set up to promote equality between the sexes.

In addition, earlier in September, Watson had the brilliant audacity to express what’s truly ugly about the spate of nude photos stolen from celebrities: not the theft itself, nor the humiliation intended for its victims, nor even the crimes committed against privacy; rather, it’s the lack of kindness demonstrated in the aftermath: Even worse than seeing women's privacy violated on social media is reading the accompanying comments that show such a lack of empathy.

Perhaps as a reaction to this, or as a follow on from the rash of doxed celebrity nude photos, which made headlines at the end of August and again over the weekend, a rather nasty website sprung up.

That website, the threateningly titled emmayouarenext.com, featured a 4chan logo, a photo of the Harry Potter star wherein she’s either crying or trying to get something out of her eye, and a clock counting down to the release of the apparently stolen photos. Was Emma Watson the next celebrity to fall victim to leaked private photos?

After all, 4chan was the venue where those photos were first published, and, well, gosh, there was a 4chan logo on the threatening site.

This all got the 4chan b/ board commenters talking (I’m not going to link to it: it’s NSFW nor brain health). The original thread – since taken down, though some of the posts were preserved at Death and Taxes – was vicious.

These are some samples – and mind you, these reportedly aren’t even the disturbing ones:

It is real and going to happen this weekend. That feminist bitch Emma is going to show the world she is as much of a whore as any woman.

She makes stupid feminist speeches at UN, and now her nudes will be online, HAHAHAHAHAHAHAH

The clock reached midnight and no nude photos appeared on the site. Instead, a marketing company’s site appeared in its place, with a letter addressed to the US President. We have been hired by celebrity publicists to bring this disgusting issue to attention. The recent 4chan celebrity nude leaks in the past 2 months have been an invasion of privacy and is also clear indication that the internet NEEDS to be censored. Every Facebook like, share & Twitter mention will count as a social signature -- and will be one step closer to shutting down www.4chan.org.

The site pleaded with visitors to help shut down 4chan. Join us as we shutdown 4chan and prevent more private pictures from being leaked. None of these women deserve this and together we can make a change.

We agree that that none of those women deserved to have their photos stolen from their private accounts and then published on the internet for all to see.

But neither did Emma Watson deserve to be a victim of a threatening hoax site set up to bring attention to a cause.

What sort of stunt is that?

Some of the threads of 4chan are disgusting, but the way to get people on your side is not by threatening someone who is part of the very people you are ‘trying’ to protect.

It’s scary, it’s nasty and it isn’t the way to get across your point successfully.

Anything that attempts to do cybermarketing by pretending to be a cybercrime is worth treating as a crime in itself.

We wish Ms. Watson all the sympathy in the world.

But I’m not worried about her. Even if the photos were really out there, who cares?

She’ll always be brilliant, doxed photos or no.