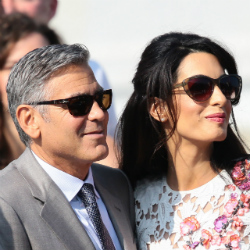 Actor George Clooney’s celebrity counterparts have been through the privacy wringer lately, with a new batch of pilfered nude photos being published seemingly every week over the past month.

Well, he wasn’t about to let leaked photos ruin his Big Day this past weekend, when he and London barrister Amal Alamuddin got hitched in Venice at a star-studded, no-expenses-spared, three-day gala – particularly given that he reportedly sold the rights to wedding photographs to American Vogue, in return for the fashion magazine making a contribution to a charity of his choice.

To avoid the chances of having guests spoil that charitable intent, Clooney gave every one of them a “burner phone”, the Sunday Telegraph reports, and told them to leave their mobile gadgets back at their hotel rooms.

You’ll be familiar with burners if you’ve ever watched thriller movies. In The Bourne Identity, for example, Matt Damon’s Jason Bourne character pops them like candy, covering his tracks from the bad guys.

Law enforcement agents don’t like burners, since they keep users anonymous, relying on prepaid SIM cards that are sold in shops where buyers don’t need to register them, as drug dealers in TV series The Wire know only too well.

Plus, the phones can often be topped off with cash or vouchers, leaving no way to trace them.

The Sunday Telegraph claims to have obtained part of the document sent to Clooney’s wedding guests, which instructs them on the mobile phone security protocols:

The phones you've been given have a code. That is your ticket to everything. We will be taking lots of pictures... but we have to work very hard to keep our pictures our pictures.

The burners’ codes served as the ticket to enter the event. If guests needed to take their gadgets with them, they were told that their tablets and mobile phones would be collected at a kiosk before they entered.

Clooney’s decision to give out burner phones was possibly done to avoid not only intentional leakage of wedding photos, but also to protect the photos from getting chiseled out of his guests’ cloud accounts by cyber thieves.

According to TMZ, Clooney told guests that the reason for the tight security measures was the plethora of doxed celebrity photos that have been in the news lately.

Many of the photos were jimmied out of iCloud accounts, by means that reportedly have included phishing and brute-force password guessing.

For those of us without the luxury of special burner phones but who still want to keep their photos private, make sure you batten down your accounts with some good security hygiene steps.

If the next celebrity who gets married wants us to write up a little cheat sheet with those tips on it, we’ll be happy to do so.

Just give us a call. And feel free to use a burner phone to do it!