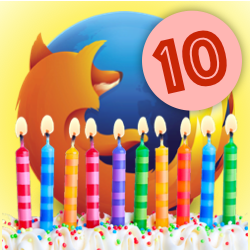 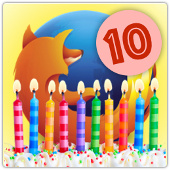 The Firefox browser turned ten years old over the weekend.

“How time files,” was my first thought.

But my next thought was, “Ten years? Isn’t it a lot longer than that?”

Well, it is longer than that, sort of.

The oldest browser you can still get, and that is still officially built and shipped (for example with many Linux distros), is Lynx, which dates back to 1992. 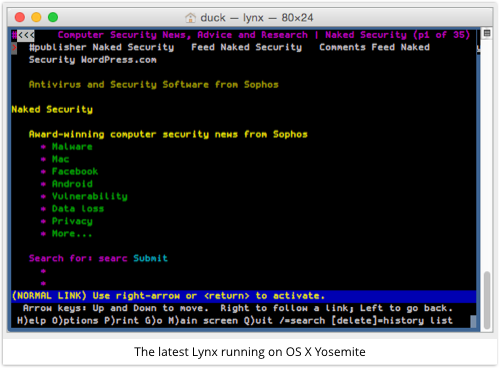 But Lynx is text-only, so despite the fact that it is small, and fast, and portable – indeed, there was even a DOS version – it has only ever been a niche browser.

There were a few graphical browsers in the early 1990s, with ViolaWWW popular on Unix, and Cello (geddit?) on Windows. 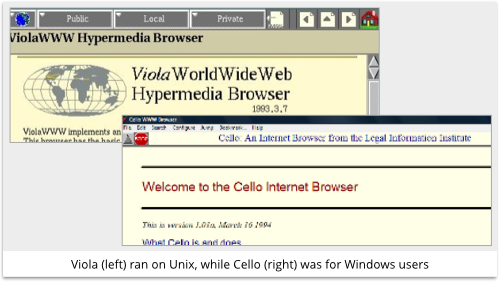 In 1993, however, Mosaic appeared and quickly became popular, not least because it was available for lots of different platforms, including Windows, Unix and Macintosh.

In fact, the once-popular Mozilla Application Suite emerged from the Netscape source code, which was opened up for free in early 1998.

But Mozilla Application Suite, being a suite, was overkill just for web browsing, like a full Microsoft Office install is over-the-top if all you want to do is edit a text file.

→ You can still get a direct descendant of the Mozilla Suite, if you like that kind of thing, although it is known as Seamonkey these days.

So the Mozilla Suite in turn begat the more focused m/b, or Mozilla Browser, released publicly under the no doubt more memorable name Phoenix (geddit?).

Phoenix as a name didn’t last long, not least because the makers of the well-known Phoenix BIOS had a browser of sorts of their own.

So Phoenix quickly became Firebird, but that soon fell by the wayside, too, because another open source project was already using that name.

And that’s how we ended up with Firefox, released officially with a 1.0 version number on 09 November 2004.

The datestamp on the US build was two days before that, while other localised variants appeared over the next month or so, but give or take a few days, Firefox really is ten years old. 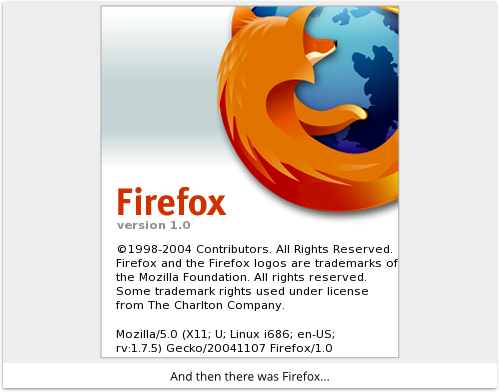 If you’re a Firefox user, you’ll no doubt have received an unusually-numbered update in the past day or so, taking you to version 33.1.

As Mozilla puts it:

As part of our [10th] anniversary, we’re excited to announce a special release of Firefox with new features that put you in control.

That’s not exactly saying that the 33.1 version was intended as a birthday special, merely that the announcement was subsumed into the birthday celebrations.

Given that version 33 has already had three patches since coming out under a month ago, you might therefore be forgiven for treating 33.1 as a “better sounding” 33.0.4.

But there are two new features that Mozilla especially wants us to know about in 33.1, namely the Forget! button, and support for the tracking-cookie-free search engine DuckDuckGo.

The Forget! button is a curious beast: the option doesn’t appear in the regular menus (or, at least, not where I could find it), but can be added to the toolbar.

Apparently, it’s for those household emergencies where you suddenly need to cover your tracks, wiping out locally-stored data such as cookies and browsing history for the last five minutes, two hours or 24 hours. 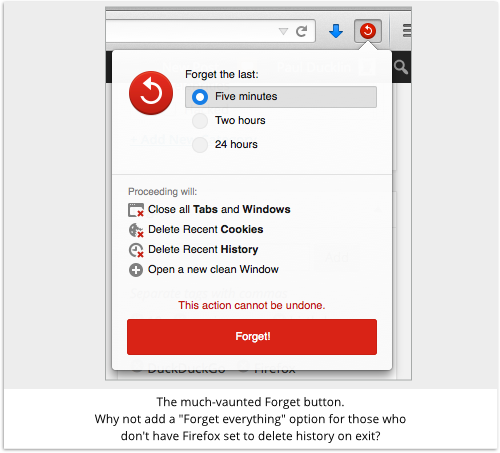 Forgetting the last 5 minutes in a hurry may spare you a lecture from your mum when she suddenly needs to use your browser in a hurry, but it does nothing to encourage you to purge your entire history on a regular basis.

Routinely ditching all your cookies and browser history is a minor inconvenience, to be sure, but it is one of the handiest ways of making sure you don’t stay logged in to online services for longer – often very much longer – than you need.

Perhaps Mozilla will recognise this by adding an “Forget Everything” option to the Forget button, so you can use it as a convenient way of clearing all your history, too?